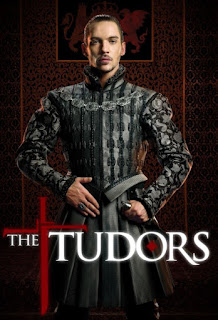 I've been enjoying The Tudors enough to finish the series without taking a considerable break from it besides maybe a two-week breather. One of things I enjoyed about the show is noticing actors in the series that I knew elsewhere. This season I saw future Game of Thrones alumni Ian Beattie (Ser Meryn Trant) and David Bradley (Walder Frey) in minor roles. I also didn't notice that Princess Mary Tudor's actress Sarah Bolger was the beautiful Princess Aurora in Once Upon a Time. I sure did recognize another Once Upon a Time actor Colin O'Donoghue (Killian Jones) as the Duke of Bavaria. 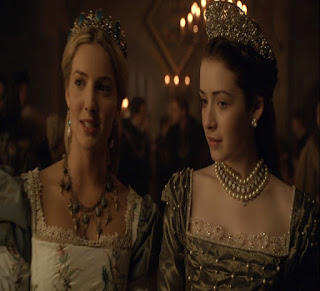 The season takes place soon after the death of King Henry VIII's second wife Anne Boleyn. While Henry made it out to be a case of romantic betrayal, many silently believe it's because she couldn't bear the King a son. The King marries Jane Seymour, whom seems to be a good Catholic (which deeply concerns the King's Anglican supporters) and very happy to convince Henry to re-legitimatize his two daughters Mary and Elizabeth from so-called "bastards" to princesses. 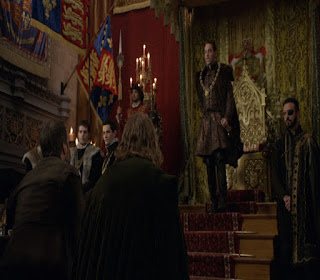 While Henry's love life seems to go smooth at first, things take another dark turn shortly after the birth of Prince Edward. To make matters worse, the Kingdom of England is far from being at peace. While major threats from France, the Vatican, and the Holy Roman Empire seem unlikely now, Henry has to worry more about his own subjects. His own court is divided over their mild love or deep hatred over Oliver Cromwell. His Catholic subjects aren't taking too kindly to the destruction of their faith and "rebel" against Cromwell instead of rebelling directly to the Crown. 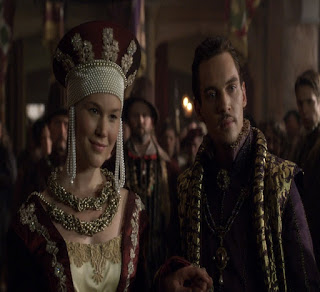 Overall I'm still impressed by The Tudors. Maybe not as good as the first season, but a good bit better than the second one which I thought suffered from a rather strange place to start and end that season anyway. It's also a good bit shorter than the previous two, which I certainly don't mind. I'd rather have the episodes be interesting all the time than dulled out with meager filler. So yes I will be starting the fourth and last season soon enough.

I've never watched this one.

I haven't watched this one either but it sounds pretty good.

Haven't watched this one.

Cute! There is a hint of a smile on her face.