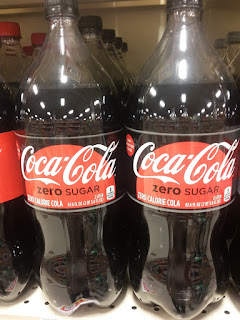 Now I use this term lightly, as it's not really bad, but it's not very good either. I was actually pretty impressed by its predecessor Coca-Cola Zero for being a diet soda. Now actually, the original (along with Diet Coke) I believe (don't quote me on that) was zero sugar, but Coca-Cola did switch up some of the flavoring this time around. I never really drank the original unless Daisy had gotten one out of the vending machine, but this new formula does feel like a mistake. I was curious to try one and it will never happen again.
Posted by Adam at 5:00 PM

haven't tried this kind, don't know if it's available in Canada yet.

I don't think I've ever seen that one.

I liked Coke Zero and thought it was a good alternative to go along with Diet Coke, yes Coke Zero was sugar free, I haven't tried the New Coke Zero Sugar and if they monkeyed with the flavoring I most likely won't.

I'm not a Coke drinker but, yes, it sounds awful.

Ummmmm... I'm getting confused with all these versions. I do like Coke Zero. Do they no longer sell that?

I haven't tried this one yet, it does seem pretty good.

I'm not a soda drinker. But Jerry drinks Coke Zero and all its variations. I think Coke is finally cleaning up its labelling again. There are so many varieties and some are exactly the same composition, it's impossible to know what to select. Coke Zero, Coke Light, Diet Coke? Coke Zero without caffein (but I thought it had ZERO of everything)... What?!?

I stopped drinking soda about a year ago, but I remember loving coke - not the diet kind though.(lol) I get the carbonation from Perrier or Pellegrino water these days. Hugs...RO

I gave up drinking any kind of pop almost twenty years ago, and I'm so glad I did!