Fact of the Day: Catherine of Alexandria 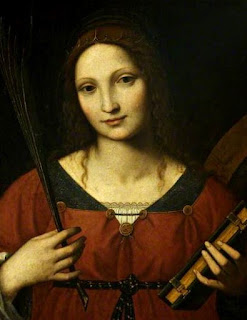 According to the early Christian churches, Catherine of Alexandria was a "princess" and converted-Christian who converted many herself to the faith. The legend claims that the Roman Emperor Maximian had 50 of his best Pagan philosophers debate her and that she ended up "winning" the debate. However at the age of 18, she was murdered as a martyr by a Pagan Rome. However modern scholars doubt she existed as her story (along with the time she was supposed to have lived) is very similar to that of Hypatia, though Hypatia was a pagan who was murdered by Christians.
Posted by Adam at 12:00 AM

So things got twisted a bit.

That's pretty interesting, and I'll bet there are lots of heated debates about this. Hugs...RO

Ohhh, that is very interesting...

Some competition among martyrs there.

Fake News even then.