Fact of the Day: Robert Dudley 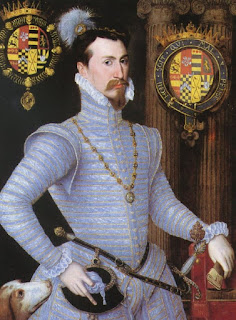 Robert Dudley was originally a childhood friend of Queen Elizabeth I. His brother was married to Lady Jane Grey who his father tried to make Queen of England. His family fell from grace (which almost killed Robert as a result) when Mary Tudor took the throne from Lady Jane Grey and her husband. He almost became King-consort as he was Elizabeth's favorite and a suitor for her hand. Still the marriage never happened, but Elizabeth suggested that Mary, Queen of Scots marry him to bring peace between England and Scotland (and also bring peace between Protestants and Catholics in Scotland) but the marriage was rejected more by Dudley himself so that marriage never happened either.

Sure got tossed around a bit

Is it his character that was in the Elizabeth movie with Cate Blanchett? I don't remember him from my history classes but the name sounds familiar.

Had he married Mary Queen of Scots, I wondered how that would have turned out. I suspect either she'd live longer, or he would have died sooner.

Sure was a lot going on. Hugs...RO

Well one would have fortunately parted this earth first.
Who really cares what one went first.
Colin

I can't get over how much drama surrounds these people!