Fact of the Day: William Tyndale Vs The King 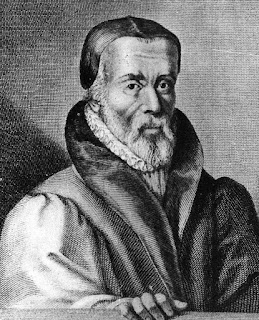 William Tyndale was the first notable man to translate The Bible into a more modern form of English. He smartly moved to a more Lutheran-friendly area of Europe before he became well-known for doing something so against the Catholic Church. However when it became known that he opposed King Henry VIII's annulment to Catherine of Aragon, the English king demanded to the Holy Roman Emperor that Tyndale be executed. While there was difficulty at first, Tyndale was eventually and brutally executed for it.
Posted by Adam at 12:00 AM

So sorry. Thanks for your information.

He made a bad enemy alright.

I've read that many of the famous phrases we find in the more well-known, and still widely-used, King James Version originated in Tyndale's Bible, including the introductory phrase "In the beginning..."