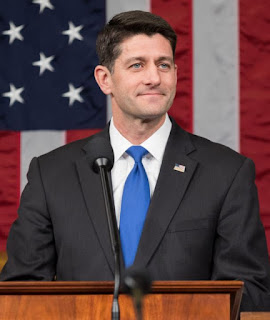 Speaker of the House Paul Ryan will not seek re-election, which means he will not be Speaker of the House come next year when the new Congress takes effect. In many ways, Paul Ryan represented a lot of younger Republicans, who were were trying this quasi-Libertarian thing, but like many young Republicans, Ryan stood silently as Trump took the road of racist-"populism" and incompetent government. I'm actually happy for Speaker Ryan as for someone who hates government so much (despite having no real experience in the private sector) perhaps now he will now (maybe) be free from it.
Posted by Adam at 11:30 PM

He says he wants to be able to spend time with his kids and no longer be a weekend dad. That's pretty cool. I'm all in when anyone wants to focus on family. Hugs...RO

Time for a change.

Well the "madman" of 1600 Penn Ave. has got rid of another who couldn't stand the utter chaos any more.
Now the Turnip Top wants to rejoin the TPP group after making it a priority to get out of in his election promises.
Lets hope the TPP members make this rejoining as hard on the US as possible. The American continental member's leaders - north and south - Canada, Mexico, Peru and Chile must be rolling around having fits of laughter.
Trump is beginning to make Adolf, Joe and Mao damn near look sensible.........at least they knew what they were doing.
Oh God HELP the USA!
Colin