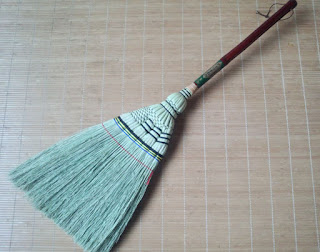 My first job was at a supermarket, and one common task at night would be to clean the sidewalk off of dirt and trash. I'd use a leaf blower for most things, but I'd use a broom at the bench where (mostly managers) would have their breaks with their cancer-sticks. Sometimes there'd be someone out on the bench while I was cleaning and this time it wasn't a co-worker or manager, it was just some random person. He looked really shady as he was putting out his bad habit in the ash tray. He basically asked me if I could put in a good word for him as he wanted a job there, but he didn't even give me his name. Good thing for him he didn't, because that would just cause me to put in a bad word for him. But seriously what did he expect for me to go up to the hiring manager and say "Hey this weirdo wants a job, he seems like a good candidate to me".
Posted by Adam at 12:00 PM

I sometimes wonder how some people ever get a job!

lol I wonder if he got a job somewhere else.

First: cancer stick ahahah
Second: yeah! Actually this happens to me very often — people I went to college with that I don’t really know that well ask me all the time to put in a good word becuause they want to work in the same company I do. I don’t do it because I don’t want to lose my credibility:/

You did the right thing. Hard to trust anymore.

How can you possibly put in a good word for someone you don't know?

WHY would you put in a good word for a total stranger? Sooo goofy..