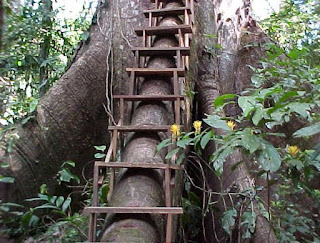 When I was little I was friends with the kid who lived next door. Our two yards were side-by-side but separated by a chain link fence gate. His name was Tyrone, and we had a pretty harmonious friendship until he got older and started to show some of his deep issues. I think one of those issues was that his dad was in prison for a few years, but when he was a kid, he really had high hopes of what it'd be like when he returned. Tyrone had promised that his dad would build a treehouse. 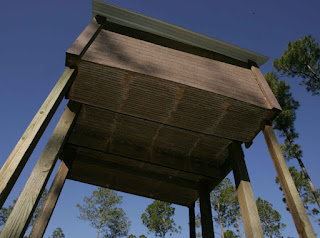 Ironically this dream was a little dumb as there wasn't a good enough tree, but I did imagine a free-standing one in my mind. It was pretty neat what I would imagine it'd be like. In my vision, that treehouse looked nicer than my first eventual house. Tyrone's dad didn't get out of prison until about eight years later and I was already in high school. Even if he did get free when we were small, I really doubt we would have gotten that treehouse in retrospect.
Posted by Adam at 12:00 PM

How sad. I hope Tyrone gets that tree house some day.

Some dreams are never meant to be.

Dreaming is what kids do. Some of them come true, some don't.

You never know. You might still build your dream tree house.

Maybe Tyrone will have kids and build one for them.

Poor Tyrone. I wish he would have gotten his tree house.