Fact of the Day: Catherine and Henry Cousins 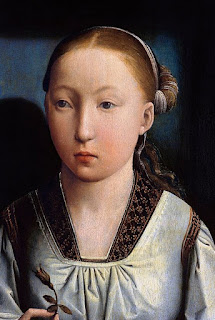 King Henry VIII of England's first wife Catherine of Aragon was his third cousin-once removed via King Edward III's son John of Gaunt. While John of Gaunt never became king himself, before the War of the Roses, the line of succession was passed through himself after the death of his nephew Richard II, giving claim to the House of Lancaster versus their rivals in the House of York.
Posted by Adam at 8:57 AM

Sure went all around the family tree

Things do go round and around in those families. Very interesting. Have a wonderful day.

Inbred, the whole lot of 'em.

I don't know much about that time or that family's ancestry so this is interesting.

All in the family...

Gracious! Had no idea they were related... but then again they got divorced, right?

I've never seen that picture of Catherine. She's pretty, not at all like the descriptions I've read about her.

She was luckier than some of Henry VIII's other wives, and she was admired by the English people. Now we have the Church of England, thanks to Henry.