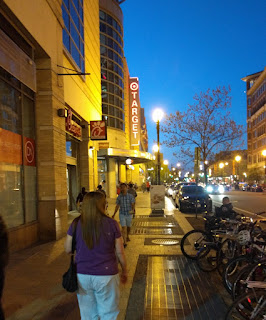 Since our flight landed in the afternoon, and that it takes quite some time (plus the DC traffic) to get from Dulles Airport (which is really in Virginia rather than DC) to DC, I knew most of the things we wanted to see would already be closed by the time we got there. So my plan was to head to DC USA, which is a "mall" in DC. Now my experience with "malls" in Atlanta, Georgia were rather...pathetic. But I knew this place had a Target so that was something. It's not really a traditional mall as most things you can only enter via the outside instead of a giant hallway inside. 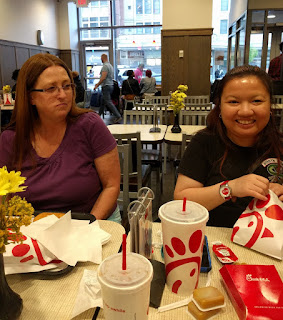 By this time we were hungry, all that was there to eat was Chick-Fil-A and IHOP, and Chick-Fil-A won that battle. Daisy learned later that many places in DC (as it's a mixture of north and south) don't serve sweet tea, but since Chick-Fil-A started in Atlanta, Georgia, of course they dou. 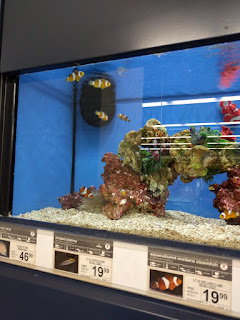 I was unimpressed by the mall, it didn't really have ANYTHING we didn't already have in Spartanburg. But their Petco is better than ours. 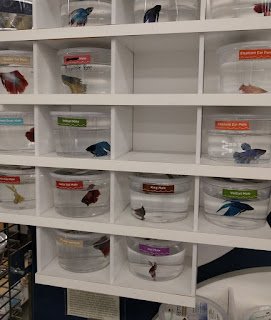 Every-time I pass the betta fish, I do recall the one I used to have and the two Daisy failed to keep alive for more than a few weeks... 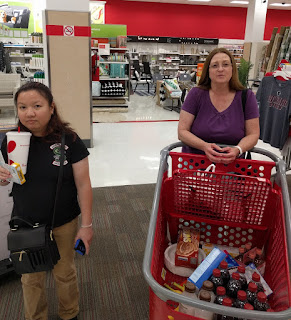 But the night wasn't a total failure, We managed to stock up on a few supplies for the AirBnB we were staying at. When you travel by plane, you're very limited to what you can bring. Try getting even a simple soda bottle past the gates...won't happen.
Posted by Adam at 5:00 PM

I've long had the impression that Washington is kind of parochial aside from being the capital. Will be interesting to read your further impressions.

At least you got a bite to eat and a few things you needed.


Im impressed how different is in the different states, times ago I thought all malls were similar, but is not.
Have a nice time.

Bloody boring if all Malls World wide were the damn same.
If you want to see a really glamorous upmarket type Mall
do to Copenhagen, (that's in Denmark for non-geographical).
Colin

Surely your place of residence in Washington has some sort of
eatery attached??????
Colin

And the vacation began!

Unfortunately, all malls are more or less the same, full of the same chain stores as every other mall. Unique, local stores or boutiques can't afford the rent in malls.

I'am glad to read the whole content of this blog and am very excited,Thank you for sharing good topic.