Photos: Our First Plane Trip Together 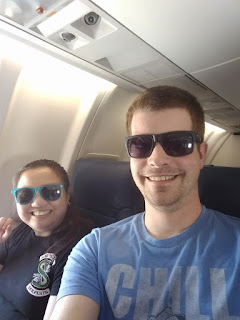 Despite it being my first flight, I wasn't as nervous as I thought. I even managed to be happy about it. This is right before takeoff. 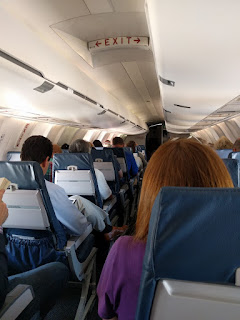 Like I said before, it's wasn't a big plane (50 people plus crew) at all. We were more towards the back, but our window was right next to the wings. 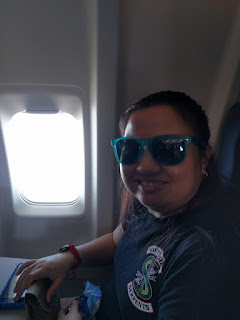 Daisy has zero fear of flying. She demanded the window seat. She looks out the window with glee, just like my old dog Zelda would look out the car window on car rides. 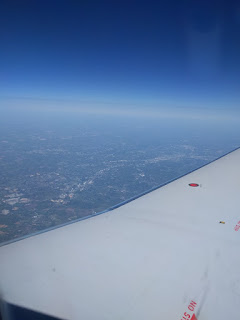 I will admit it's quite a view from the sky. Though I closed my eyes during takeoff, I tried to be a brave as I could, but I saw something like this about five seconds later. I wasn't prepared for that fast of a jump into the sky. 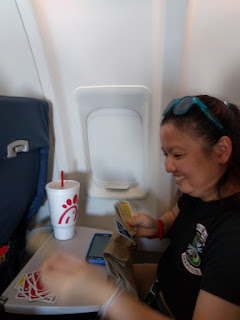 I still had to cope with my fear of flying, so Daisy wanted to play UNO cards while we waited for the plane to get to Washington D.C. I actually wanted to watch a movie I had pre-arranged on my smartphone, so having her close the window while we played was the compromise. If we weren't playing UNO, she could leave it open. We did experience mild turbulence getting close to DC (we were pre-warned) but it wasn't that bad. A guy near me mentioned that this was a "small stupid plane" and that the plane ride was "weird". I actually didn't think it was that bad, so I guess that means I handled it well.
Posted by Adam at 12:00 PM

Haha! I enjoyed this post, Adam. I nearly always get the window because I love to look out it and take photos and watch the geology. I think of turbulence as rock and roll. Planes are really safe, and it's only rarely that something bad happens. If your number is up, your number is up.

Good that Daisy is not scared it would help to calm you.

I like windows seats, too. Looking at the clouds and other planes flying by is pretty awesome.

You did good Adam. I was scared to death when we flew to Alaska in 1998. I could not let my feet touch the floor of the plane. Crazy, I know. Have fun!

Good for you, Adam! You look as cool as a cucumber. You're a seasoned veteran now!

Happy Journey Adam! You don't seem to be nervous...

This is such an interesting post, Adam. Good for you for combating your fear of flying.

Well done Adam. I like flying but my husband just hates it.
Let's hope you both can soon fly off somewhere again, next time you will know what it's like to fly in the air like a bird..

Congratulations. The world is now your oyster. I love that first shot of you and Daisy!

So pleased all went well.
Love that first photo of the two of you.

Glad your first plane ride was a success! I am like Daisy and like to look out the window too. However, I get motion sickness something awful and try to sleep through my flights. You didn't report feeling ill, so I am glad you and Daisy had an enjoyable flight.

Glad all went well for you, Adam. You and Daisy are so cute together.