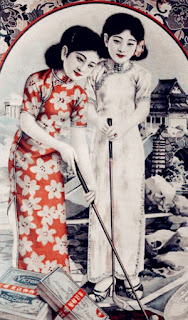 Not too long ago, a Utah Caucasian student wore a cheognsam dress to her prom causing quite a stir of controversy. I will say, I always found the cheognsam to be very pretty and I can see why she would want to wear one. Though given America's bad track record for racism, it does become at least awkward when we see non-Asian women wear them because it is a very cultural dress. But some people in China were asked what they thought since the story made enough of a splash to make a waves internationally, and since the student wore it as she liked the dress, they were okay with it because they thought it was cool that she loved something about their culture. And if you think about it that way, it does sound a lot better.

As far as I can tell, nobody outside the US thinks "cultural appropriation" is a thing, and I'm not surprised that the Chinese people quoted on this case took the opposite view. I've heard of Japanese people similarly being baffled when they hear about Americans being criticized by other Americans for adopting elements of Japanese culture. We don't mind when people elsewhere listen to American rock music or watch American movies. The whole thing is stupid.

The controversy seems silly. She should wear what she likes to her prom.

I think it's fine to wear the dress, she did so because she liked the dress. I do not see anything wrong with that... I used to have one, they're lovely.

I really don't see a problem with that.

The line is often blurred between cultural appreciation and cultural appropriation. I hope it gets more clarified soon because it can be a big problem.

I honestly thought it was inappropriate, but then when I asked my hubby who's of Chinese descent (born in Canada), he said he didn't care. I wore a cheongsam as part of the wedding ceremony but would never wear it for a party or anything like that.

Seems a stupid "tempest in a tea-pot".
Many people here in Australia - well we are closer to Asia - buy these dresses when on holidays and wear them. No bloody problems here.
I had a very smart Nehru Gold braided jacket which I wore to functions.......the damn thing cost what I thought was at the time
a fortune in Hong Kong......it was tailor-made.
Colin