Donald Trump Says He Has Full Power to Pardon Himself 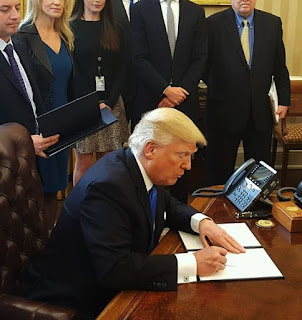 With the results of the Mueller investigation looking scary for the Trump crowd (despite their pathetic denial), Donald Trump just recently called the whole thing "unconstitutional" and that he researched it and "yes the president can pardon himself" while claiming he did nothing wrong. Even Richard Nixon didn't have the nerve to try such a thing, he got his lackey Gerald Ford to do it for him. While the law is kind of unclear if a president can or cannot, even Nixon knew he probably couldn't get away with that. 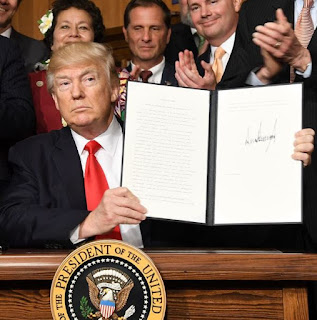 Which would be likely for Mike Pence (who obviously has no true morals holding him back) to become president if Trump is impeached and then pardon his orange overlord. I would personally like to see a constitutional amendment citing that no current or future president can pardon any president for any reason.
Posted by Adam at 12:00 AM

I agree with you about that constitutional amendment.

I think that constitutional amendment would be a good thing, Adam.

I think Melania is still getting over Stormy Daniels if she ever can.

Seems like that should always have been part of the constitution.

The guy is doing his best to become king, if not god, of the U.S.