Fact of the Day: Washington the Babysitter 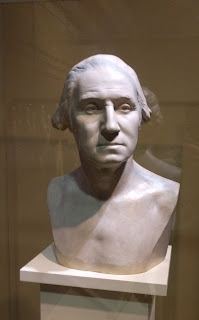 Washington had the desire to retire after one term instead of two terms. A major reason he stayed in politics was because two of his cabinet members Thomas Jefferson and Alexander Hamilton had such polarizing politics that they risked dividing the country without someone they respected to tone down their war of politics.
Posted by Adam at 12:00 AM

That's commitment to politics and to the country.
Have a nice weekend Adam.

And what an excellent job he did apparently of what you read.

Ha ha, "babysitter." The USA could use a George Washington today.

Thanks for this fact Adam.

When Washington finally did leave office, it shocked the world. Back then, no one VOLUNTARILY gave up power!

We need a Washington right now.

wonder what they would think about what's going on now?