My (Not So) Favorite Quotes: Hearts Guns and God 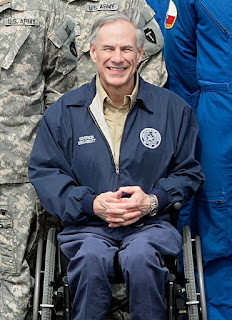 "The answer to gun violence is not to take guns away, the answer is to strengthen the Second Amendment rights of law-abiding citizens. The problem is not guns, it’s hearts without God."

Greg Abbot is the governor of Texas, and Texas not being the smartest state, elected this moron. If you look at Europe and especially Japan, gun restrictions prevents gun homicides and makes civilization safer as a whole. The problem in America is definitely guns. To literally blame this on the irreligious and other non-Christians is an act that should be grounds for impeachment. But no, the Texas Republicans will keep believing in fairy tales from over 2000 years ago, the fantasy that guns "save" lives, and they keep rocking the myth that Republicans in office actually care about the lives of regular folk.
Posted by Adam at 12:00 PM

Yea verily. But who listens?

I(m agree with you. Is terrible how die people in USA !

Well what do you expect from a bloody idiotic Texan!
Colin

I'm not sure how God and guns go together. Sounds like quite a contradiction.

Really a beautiful blog.It is very astonishing and marvelous design.

The problem is not guns, it’s hearts without God.

These nitwits never address the fact that the least religious countries in the world are also the least violent.