Photos: America's Shameful Past at the Smithsonian American History 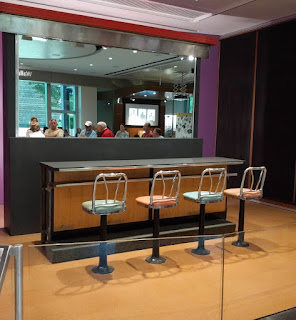 All these were in various spots at the National Museum of American History. These are the seats at the famous Civil Rights sit in in Greensboro NC. Much like the NFL anthem protests today, racist white people hated these protests. While the protesters kind of knew what to expect, nevertheless they were spat on, had things thrown at them, and were also beaten as well. That's heroism and bravery. 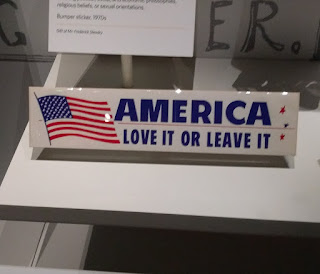 This is a bumper sticker advocating for the Vietnam War. Not so funny enough, this phrase was used by right-wingers again during the George W. Bush days. And now we see it again said with the Trump puppets when we stand against his tyranny. One dimensional patriotism is not patriotism. 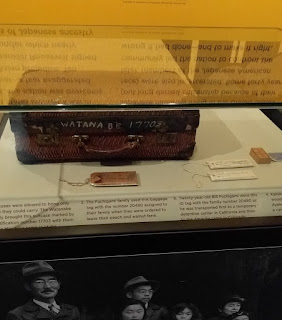 This was a suitcase from a Japanese-American family who were sent to the Internment Camps during World War II. What's happening today with Hispanic families who get caught crossing the border, isn't much different. This is what history teachers mean whey they say "those who do not know history, are doomed to repeat it."
Posted by Adam at 12:00 PM

It's important to preserve and acknowledge shameful parts of history in order to learn from them and hopefully never repeat them again.

That's an interesting thing to see.

The good and the bad parts of our history are so important to remember.

"One dimensional patriotism is not patriotism." Excellent words, Adam.

Well done Adam.
Maybe the "Looney in Power" today should go here for some lessons.
He continues to loose your Allies for you. Insult after insult.
He is a bloody "*#@^ing" disgrace.

Obviously he has no concept of trade principles, you'll have no trading partners at the rate he imposes tariffs and insults, and as for families being kept together - forget that one. He is a monster.
Would have qualified with flying colours for a guard at the railway
yards at Auschwitz - Treblinka in separating families for the "GAS Baths".
Colin

As hard as it is to look at some of those "bad" things they really are part of our past. We look at them and learn, I think. I hope you have a great weekend, Adam! Diana

An embarrassing part of our history, for sure, but times we must not forget. While we've come a long way, we still have a long way to go where it comes to equality for all.

All so awful. And it seems that many of those who DO know history will repeat it anyway because they and their ancestors weren't the victims in history's shames.

Looking at the news, it's hard not to think we're repeating it.

I would find this museum fascinating, Adam. We must not forget the hateful and shameful things our country has done in the past. I am really upset over what is going on in our country right now. I spent much of Wednesday evening writing my Congressman, AGAIN. I can't wait for this fall's election!