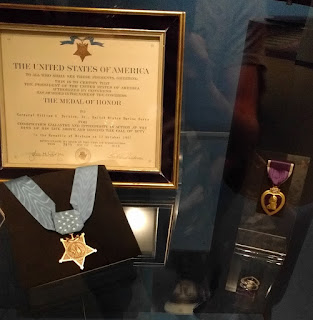 While it's hard to cover everything, here are a few things I spotted at the Smithsonian Museum of American History. This is a Medal of Honor and a Purple Heart. Not many (if any) Medal of Honor recipients never got a purple heart as well. 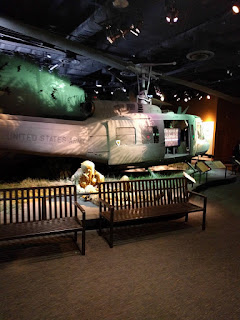 This was a Vietnam War era helicopter. 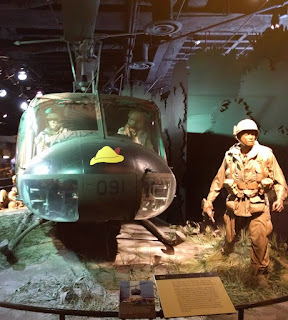 Hollywood movies did a decent job at showing what that looks like. The one here looks just like the ones I imagined in my head. 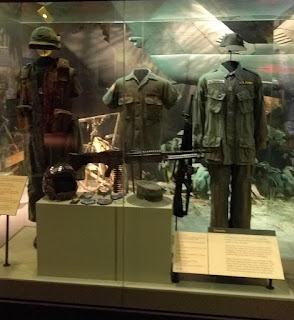 They also had some of the clothing and equipment of our Vietnam War soldiers. 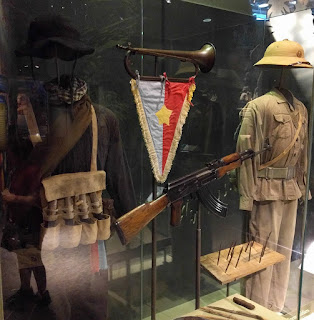 They also had the uniforms of their enemies, the Vietcong. I noticed this AK-47 which was a common weapon by many of America's enemies. Even though the Soviets designed the rifle, this one in particular was made in China. While China didn't send many of their men to fight Americans (unlike the Korean War) they were crucial in aid to the communists in Vietnam and without Chinese and Soviet aid, it would have been likely we could have won the war. 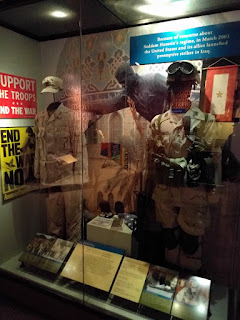 Nearby was uniforms during the much more recent Operation: Iraqi Freedom. Like Vietnam, this war was a whole bunch of mistakes lit by the insanity of politics.
Posted by Adam at 12:00 PM

The insanity of politics -- that says it all, Adam.

Those are really interesting things to see.

There may have been "a whole bunch of mistakes" but I am proud of every single man and woman that's fought for our country.

Those are some good pictures. Always good to hear someone else's perspective. Have a great week end.

I just didn't have enough time to do justice the the American museum of history.

Purple Hearts were given out like confetti.
The Medal of Honour was an award given only to the best and bravest of the best...........that is an honour.

The less said on this tragic Vietnam adventure the better.
Colin

Yes, politics can be quite insane!