Question: Did You Ever Watch Jerry Springer? 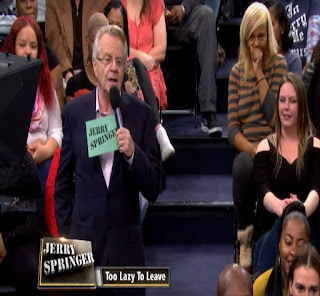 I think all of us at one point (in America anyway) have seen what some TV critics called "the worst show on television". Luckily for the critics, they announced that the Jerry Springer show is coming to an end. I used to watch a little of it during middle school and high school when I'd be sick and I was stuck to watching whatever was on in the early mornings which wasn't much. I actually like Jerry Springer as a person, but his show was nothing but the worst of society (actors pretending or real people) making us all feel better about ourselves.

The Jerry Springer show would stress me out. I like Dr. Phil but it's getting just a bad.
Lisa

I think I watched one episode. Or maybe half of one. Couldn't get beyond that!

I saw it a couple of times, which were enough. I didn't know it was still on.

Actually, my cousins were on the show once. Of course, they are hillbillies, the typical guests you would expect and only went on because they wanted a free trip. They said that they do coach you on what to say and give you a script to try to act out. The crazier you are, the better. I, for one, am glad that show is coming to an end. It does nothing but promote trash in our society.

A couple of times just to understand what my opinion should be.

Embarrassing, assaultive, disgusting, ignorant, dishonest, and idiotic was my opinion.

Unfortunately I watched parts of several episodes just to see what his show was about. I can't like or admire someone who hosts such a show. If you devote 27 years of your career to such garbage, you have no integrity.