Fact of the Day: Empire of Vietnam 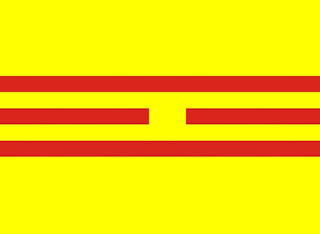 The Empire of Vietnam was a short-lived country that was a puppet state of Japan during 1945. While the Japanese had considerable influence over the ruling French, they officially took control for a few months in 1945. In a move to calm the Vietnamese people, Imperial Japan restored their Emperor and gave them a Prime Minister, but they were nothing but puppets.
Posted by Adam at 12:00 AM

Had no idea... I see this flag for the first time.

And many a string was attached to the puppets too

The Empire of Vietnam, huh? Empires usually have colonies, and, for that matter, their own puppets, but it's all semantics.

That flag is not so dissimilar to the flag of the Republic of South Vietnam.
Setting up of "puppet" emperors in Vietnam was carried forward by the French!
Colin