Fact of the Day: Jackson at New Orleans 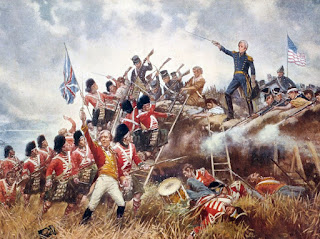 While it didn't matter in the overall picture (as the peace treaty that ended the War of 1812 occurred before news reached America) the Battle of New Orleans was a very important part of early American history. Andrew Jackson and his forces (while outnumbered) defeated the British very successfully. This helped greatly to make Andrew Jackson a war hero to the American people.
Posted by Adam at 12:00 AM

Email ThisBlogThis!Share to TwitterShare to FacebookShare to Pinterest
Labels: Andrew Jackson, fact of the day, Louisiana

Now! What do l know about the battle...
It was fought on Sunday, January 8, 1815,
between the British Army under Major General
Sir Edward Pakenham, and the United States
Army under Brevet Major General Andrew Jackson.
(No relation to Michael Jackson)...

Both armies are wrong, America belongs to the Indians.

Bob is quite right...History will tell you that.....
Native Americans, also known as American Indians, Indians, Indigenous Americans and other terms, are the indigenous peoples of the United States. There are over 500 federally recognized tribes within the US, about half of which are associated with Indian reservations. The term excludes Native Hawaiians and some Alaska Natives....

Every battle adds to one side or the other, or both, depending on which side you're on.

Exactly. See what you just did? You stole my thunder. Yes, you did.