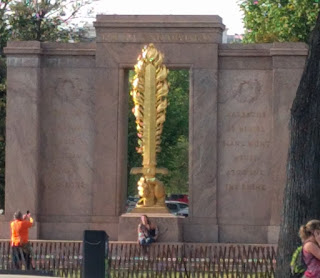 While walking around in Washington DC I spotted this memorial but we didn't have time or the energy to see it up close. It was pretty hard to miss a giant golden sword with a metallic flame. I did research on it later, it was to built honor the 2nd Infantry Division's (of the U.S. army) role in the defense of Paris (and the rest of France) in World War I against the Germans.
Posted by Adam at 12:00 PM

That's really interesting. That would be hard to miss.

I wasn't aware of this one. Glad the infantry got recognition.

All of the memorials are just amazing!

This US Division also had an illustrious record in WW2.
The capture of the vital bridge at Remagen.
Colin

PS: I am surprised Adam that you are not putting any reports
of the natural calamity that has hit Laos where Daisy's family
comes from.
Maybe this flooding from a busted dam is not on US TV news?
It certainly is getting daily update coverage here in Australia.
Then again I'd be surprised if any of your readers would be able
to point on an atlas where Laos is.

A sword with a flame -- interesting concept.

So grateful for this post. I saw it from a cab in the pouring rain and wondered what it was.