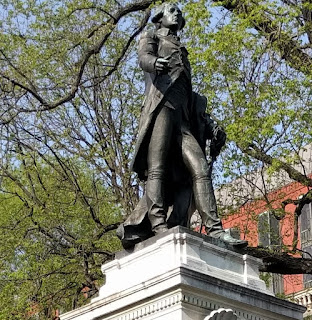 A few yards north of the White House is Lafayette Park which we only saw two statues but there are more. I saw this one of the park's namesake, General Gilbert du Motier, Marquis de Lafayette. He was a very important French soldier during the American Revolution. 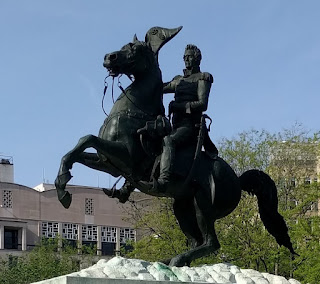 And this one is of Andrew Jackson during his leadership at the Battle of New Orleans which was during the War of 1812.
Posted by Adam at 12:00 PM

General Gilbert du Motier, Marquis de Lafayette, certainly was a most prominent leader in your revolution for Independence.
And I might add that he knew when and how to salute, not like that "draft dodger" saluting clown who unfortunately sits and tweets at all ungodly hours in your House of the Presidency.
Why can't Turnip Top sleep rather than tweet? Maybe he is missing his high supposedly slut bed warmers etc etc.
Colin

Jackson's statue is impressive. I wonder how the sculptor keep it balanced like that.

Going back to the idiot in the White House..
I had this sent to me a while back...Interesting..!!!

Young man named Donald bought a horse from a farmer for $250.

The farmer agreed to deliver the horse the next day.

The next day, the farmer drove up to Donald's house and said, “Sorry son, but I have some bad news, the horse died.”

Donald replied, “Well, then just give me my money back.”

The farmer said, “Can’t do that. I went and spent it already.”

Donald said, “Ok, then, just bring me the dead horse.”

The farmer asked, “What ya gonna do with him?”

Donald said, “I’m going to raffle him off.”

The farmer said, “You can’t raffle off a dead horse!”

Donald said, “Sure I can. Watch me. I just won’t tell anybody he’s dead.”

A month later, the farmer met up with Donald and asked, “What happened with that dead horse?”

The farmer said, “Didn’t anyone complain?”

Donald said, “Just the guy who won. So I gave him his five dollars back.”

Great photos. I'm in DC but just can't stand the thought of getting that close to the White House.

Back during the second Gulf War, when the French raised some objections about the US going forward with it (they were hardly the only ones who objected), some called them ingrates, due to the fact that the US helped liberate French during WWII. But it's forgotten that the French helped us win the Revolutionary War.