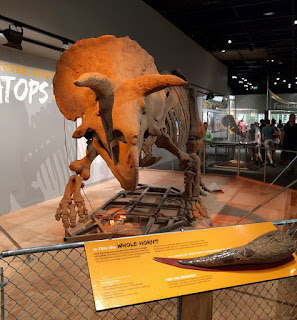 They had just a little about dinosaur fossils at the Smithsonian Museum of Natural History. When I see dinosaurs now, I think of the ultra-religious Christian lady at work who believes they don't exist, and that all fossils are fake. The triceratops was always one of my favorites. 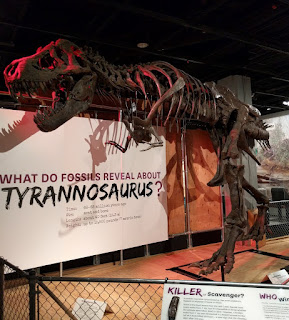 And the T-Rex of course. New scientific research is gathering evidence that the last generations of dinosaurs probably had feathers, much like birds. This apparently also includes the most famous dinosaur of them all. I've seen some artistic takes on it, some make the T-Rex look like a pretty crazy monster chicken. Colonel Sanders isn't touching that one though.
Posted by Adam at 12:00 PM

I did not know that about the feathers. That's pretty wild.
How can one not believe in dinosaurs or the holocaust and believe that news is fake?

Fried dinosaur! I wonder if it would taste like chicken.

Wonderful - I remember these.

Anyone remember the giant chicken in the Woody Allen movie Sleeper? I bet that's what a dinosaur looked like.

I just loved the dinosaur exhibit! It was so neat.

Colonel Sanders would be lunch to the T-Rex!