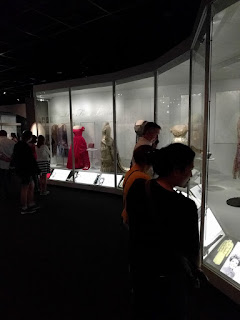 The one area that got the women all excited at the National Museum of American History was the First Lady Dresses section. 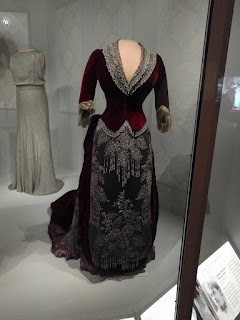 One of the earliest in the collection is of Lucy Webb Hayes. Most of the ones around her time were pretty plain, but her's certainly stand out. 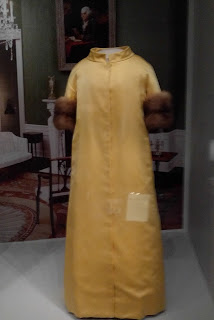 This was Lady Bird Johnson's dress, even in the 20th Century, these dresses were much more modest. 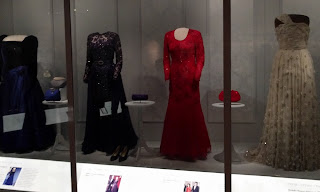 Now the First Ladies since most of the time I've been alive were much more "fashionable" and luxurious. From left to right we have dresses from Barbara Bush, then Hillary Clinton, the red one is Laura Bush's, and the one on the far right is Michelle Obama's. 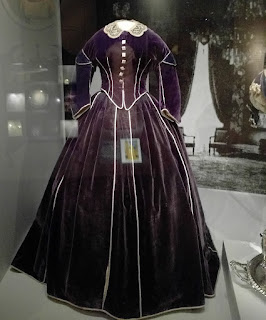 I also spotted Mary Todd Lincoln's dress. I didn't even have to be told this was her's. 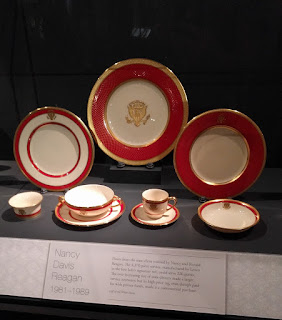 There was also China dinner plate sets of the First Ladies. I didn't think any of them were really that special except the ones made for Nancy Reagan. While it a nice set, I do think the idea of fancy plates should only be made when there are zero Americans struggling to find food. But that's just me.
Posted by Adam at 5:00 PM

I don't think Adam that at official state visits the guests from overseas should be eating off paper plates.
Could certainly be suitable for the clowns of Turnip Top's inner circle and any of his Tea Party fanatics but not for people like Justin Trudeau, Angela Merkel, Vladimir Putin, Malcolm Turnbull
(the last one is the Aussie PM for those who are ignorant) etc etc.
Colin

The dresses are my favorite!

There was a popular local burger joint in San Francisco in the 1970s/80s that displayed replicas of the White House plates. The fact that the restaurant exhibited them was more interesting than the dishes themselves. Their patty melt was the best.

Always good to have a record somewhere to show people that are interested what people wore, it is history.
China, I expected them to have their own designed china for guest who they entertained from other countries..

I would have recognized Mary Todd Lincoln's dress too. The rest of them -- no.

I would have enjoyed seeing the dresses too.

Isn't it amazing how easy it is to spot Mary Todd Lincoln?

Wow! It's pretty neat to see how fashion has evolved over the years, along with the color choices. Even though I won't be here, it makes me wonder if a First Lady will ever go out and wear something totally crazy 30-40 years from now, and how society will react. Hugs...RO

So good to see the different dresses.

First lady or not, I always love looking at fashion through the ages.

Lady Bird's looks like an old house dress. I love beautiful china, so I'd enjoy seeing that too.