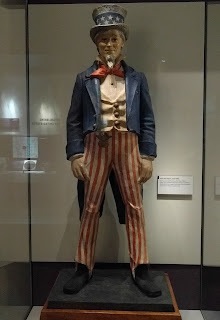 At the Smithsonian Museum of American History, there was plenty of things that showed the various symbols of America. Uncle Sam here is the more modern personification of America. 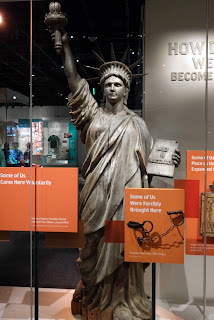 So is Lady Liberty though she's more on the "liberty" part than just the United States government. This Statue of Liberty has a color that would have been more similar to the original color if it hadn't become green by mistake. 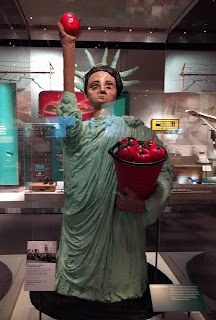 I could be mistaken but I think this Statue of Liberty was made to protest the plight and bad treatment of Hispanics in America. 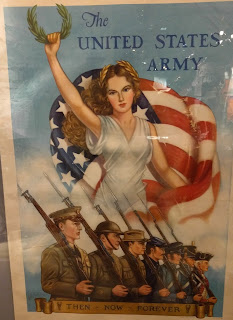 I also saw this old war poster, the woman is supposed to be Columbia who was the personification of America before Uncle Sam. Most depictions of Lady Columbia aren't exactly "beautiful", but this Columbia is gorgeous. That's a lady worth fighting for!
Posted by Adam at 12:00 PM

Your posts are making me want to take a vacay in Washington, D.C.

It's such a cool museum! I love it!

Hi! Uncle Sam is very popular in our country too. Thanks for sharing.

God Almighty ! Really over the top to the extreme .

I wonder why it got changed from Columbia to Uncle Sam.

I love this museum. I have a feeling it’s going to be too busy to enjoy when we’re there this month. I think a lot of my DC museum experience this year will be through you!

Uncle Sam was more like the dad who convinced you to join the Army. Columbia was the mom who was kind of silent about it. So you remember the dad more in your memory.

You probably won't have to deal with as many school kids. It wasn't super heavy on traffic, the worst was the Holocaust museum and Air and Space

That particular Uncle Sam looks like a teenage boy with a white goatee.