Photos: We Got To See The White House 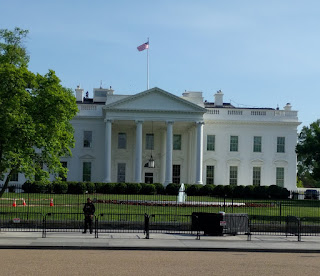 As someone who adores American History, and who is also very interested in politics, The White House means a lot to me. I always wanted to see it with my own eyes, it is a shame though that I only saw it after it had been soiled by the orange clown man-baby Russian colluding traitor moron. 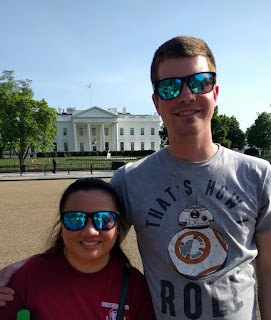 And Daisy and my mother were happy to see it as well. 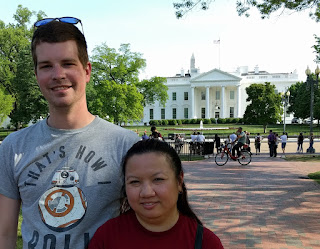 The tourist crowds weren't as large as I had expected. About half of them seemed to be protesters. I really do love that (discounting tourists) the super-majority of those who live in DC hates Donald Trump with a passion. 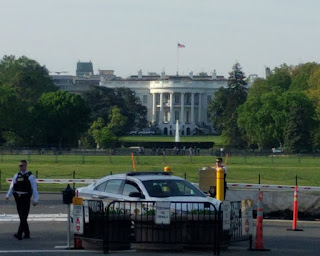 Funny enough later that day as we walking to our next desitnation I saw the other side of the White House. We had literally been in about the same spot the day before, but we missed it for some reason.
Posted by Adam at 12:00 PM

Nice that you saw the building.
Loved your photographs.

I would love to tour the white house. Preferably when someone else lives in it.

Did you go inside? I went to the White House on an 8th grade field trip to Washington DC decades ago. We went through seven or eight roped-off rooms that seem to exist specifically for tourists to be guided through.

We drove by it briefly once a long time ago.

Wow! That's pretty awesome that you were able to see the White House up close and personal. Hugs...RO

No, it's quite a bit of hassle to get in there these days. I'd probably flip off the orangutan anyway.

Very nice - I've seen it a few times and always like it.

Do you realise Adam with statements made by you in the introduction could result in some of your readers suffering severe mental breakdowns.
You, naughty boy, should be more thoughtful as regards the views of the "Tea Party" matrons of Baby Dollville!!!!
Anyhow I will condone your outburst as I roar with laughter.
Cheers
Colin

I'm glad you were still able to see it!

"The orange clown man-baby Russian colluding traitor moron..."...LMAO. That's just too perfect:D I would have probably joined the protestors if I ever get to go down there.

I'm glad to hear that many DC residents do not care for the WH occupant. I was starting to feel discouraged from the negative statements made by those who live in our town against the few of us who have spoken out against the administration.

It would be a great place to visit I'm sure, with or without the orange clown, lol.

I'm glad you got a chance to see it. We saw it when we visited in 2008. It is quite an impressive building.

My daughter was so disappointed when she went because they were supposed to tour it on her school trip, but Obama had just shut it down to visitors. Her and my husband did get their photo taken in front of it though, so at least they got to see it in passing.