Fact of the Day: Kaiser Sister 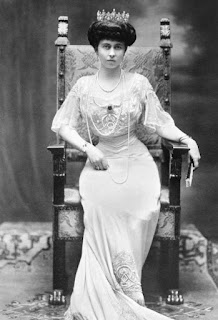 While it's not odd for a queen to officially convert to her husband's religion/denomination (if different), Kaiser Wilhelm II (the Kaiser of World War 1) was furious when his sister Sophia of Prussia converted to the Greek Orthodox Church when she married King Constantine I of Greece. He actually tried to prevent her from ever visiting Germany ever again.
Posted by Adam at 12:00 AM

Email ThisBlogThis!Share to TwitterShare to FacebookShare to Pinterest
Labels: Christianity, fact of the day, germany, greece

I think it's nice to have Royalty...
We have them over here of course, don't
mind a King..Queen..and a prince or two,
princess even..But! They are all inter
breed..all the royals, ours mostly with
the Germans, even Prince Philip is Greek!
So it's NOT true blue that runs through
their veins...But! Their o.k. and earn
a lot of money for the country and the
economy..! :).

These kings and queens of days past were so cray cray! :D

Talk about the areal housewives of Royalty!

Look at it from Wilhelm's perspective. He probably believed he and his family had a "divine right" to rule, and it's hard to make that case if a royal member switches from one divine right to another.

Of course, you could argue it's really brute force that gave those people their right to rule, but that's beside the point.

Phillip has German Blood in his veins.
He may have been born in Greece (Corfu) on
a kitchen table! But he ain't Greek. I'd be surprised
if he knew one word of Greek.
Colin