Fact of the Day: Poor Robin 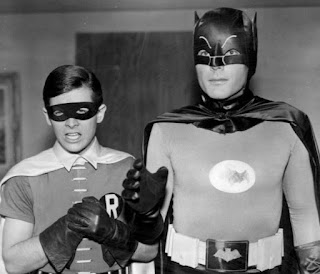 When Burt Ward played Robin on the 1960's Batman TV series with Adam West, he was mistreated by the TV network. His salary was the lowest for a character of his importance, and they never bothered to hire a stunt-double in an effort to cut more corners on the budget. Which caused Burt Ward to visit the emergency room dozens of times when stunts went wrong.
Posted by Adam at 12:00 AM

And his private life was a mess to...
We all know what he got up to when he was'nt
filming..especially in his trailer..with ALL
those naughty ladies..! :).

Never~the~less..these two were the best Batman
and Robin EVER...all the ones since have rubbish,
all of of them..never gave them the time of day...
AND..the villians were better to...HeHe! I rest my
case...! :0).

That is awful! I never knew that.

Poor guy, hopefully things have changed since then! Thank you for stopping by my blog, and leaving me a kind comment :)

They wouldn't get away with that today.

I did not know that but am not surprised. I always read he was a black belt and could do his stunts notnthat he had no choice..typical studio tactics.

That's Hollywood for you. Greedy bunch, they are.

Really? I was a fan of that show, wrote about it on my blog, so to say the least I'm disappointed