Cousins of Daisy's first cousin had husky puppies in their yard. Daisy had never seen a husky dog or puppy up close in real life before despite loving the breed for years. These little guys were more adorable than her regular stuffed animal husky dogs. We were not looking to adopt, I just knew Daisy had a good chance to play with them if she asked nicely. 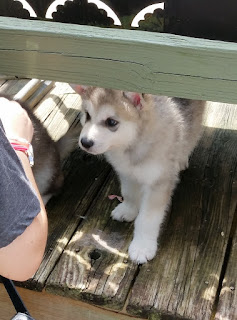 They were pretty friendly too, which is good. But huskies are usually pretty sociable dogs, so that's not a surprise. 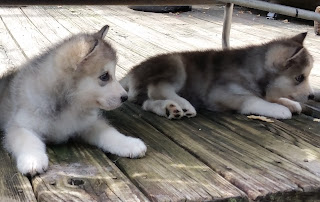 Their names (for now until someone adopts them) are Rocky and Romeo. They had four siblings who already found new homes. 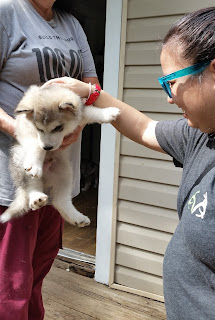 Daisy's not too big on actually showing affection to dogs. Even with a dog she always wanted, she didn't spend that much time with them. They crave attention and I often had to try to please the two pups and the mama dog at the same time. 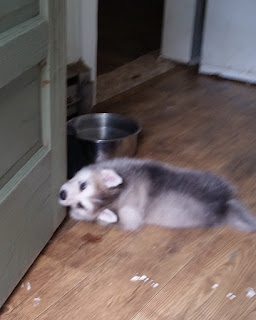 They were also teething which is typical for about six weeks old. 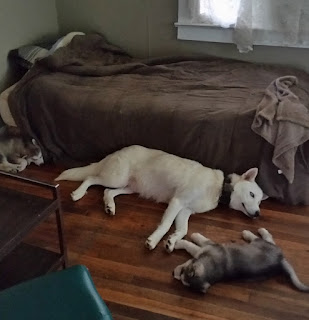 We stayed maybe 40-60 minutes. The mom and her puppies got exhausted and went to sleep before we left.
Posted by Adam at 2:19 PM

These pups are absolutely adorable! I have a husky myself, I miss when he was this little. Too adorable! Thanks for the share have a fantastic rest of your day. Keep up the posts.

They are beautiful and so cute!,,,

Oh my gosh! These pups are too cute. My husband's last dog was a husky. He was soooooo stubborn!

Oh my goodness, they are so so cute!

Oh how cute! I know Daisy enjoyed playing with them.

Really Adam - I think Huskies would prefer to be in an environment in which they are bred for - THE ARCTIC or at lease in the far colder climes of the USA - Dakotas????
Also a female dog is referred to as a BITCH - not a bloody MOMMA DOG!!!

Correct terminology for names is important even in the GREAT (???) USA!
Colin

It's rare for Americans now to use that word to refer to such an animal.

We save that word for Sarah Huckabee Sanders.

Well mate that is the correct terminology for a female dog but using it for Sarah Huckabee Sanders is most appropriate in the word's demeaning form ie: like correctly calling Trump a BASTARD.
Oh dear the "LIME GREEN FRATERNITY OF THE TEA PARTY" will be grabbing their "Bibles" !! ha ha.
Cheers
Colin

I wonder if like human immigration, huskies by the third generation have totally adapted to the much warmer climate.

How cute! A husky would be my #1 choice for a dog if I ever got one.

Cute, but very needy breed. We had one when I was growing up that was high maintenance. He liked to howl a lot too and would whine like crazy every time it thundered.

They do look cute :)