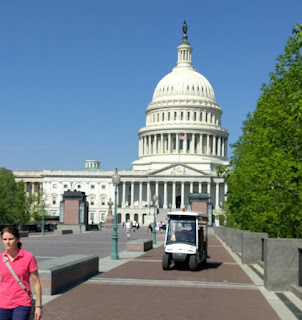 Ah, U.S. Congress, once a symbol of democracy in a not-so-free Earth in the early days of our nation's history. Now it's the headquarters for a league of super-villains with no super-powers. Hopefully that will change next year. It's right next to the Supreme Court, so it's an easy walk. 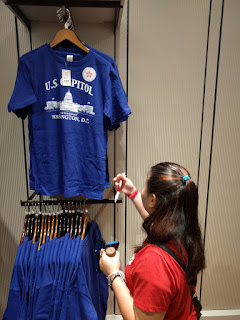 Daisy got herself a new shirt in the gift area. 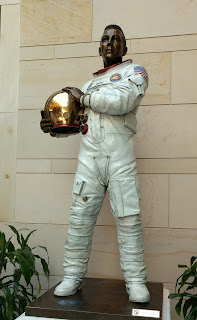 There was not much to look at in Congress, most of it wass shut off from the public. The only thing I found neat were the statues. This one was of astronaut Jack Swigert. 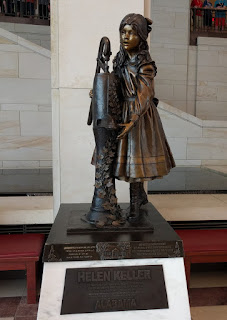 Here's one of Helen Keller. 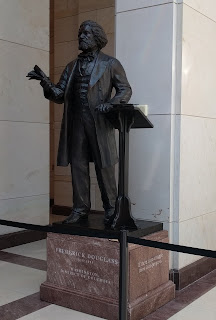 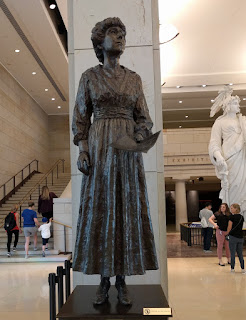 This is of Jeannette Rankin, the first woman in America to hold federal office. She also was the only member of congress to vote against both world wars. 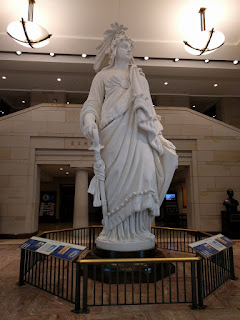 Then we have the plaster model for the Statue of Freedom, the actual one is on the dome of the U.S. Capitol Building which is the reason you won't really recognize it. I didn't even notice the actual statue until researching it later.
Posted by Adam at 12:00 PM

If you've seen the theatrical movie, TV movie, or play The Miracle Worker, you'll note that Helen Keller is next to a water spout.

Interesting to see the statues, thanks.

thanks for sharing these statues, Adam....Bill and I had planned to go there but he got sick first. :(

We'll exchange one set of villains for another. I wish I knew what the Democrats stand for, all I see is illegal immigration and socialists.

I am loving all of these posts!

I hope the "T" shirt hasn't got a "Q" or "17" printed on it?
Seems like this is the latest Turnip Top supporters code????
Colin

Great statues. Hope someone up there is listening to you regarding your future leader, lol

As a symbol, Congress represents democracy, regardless of who's in power. So I think. When the greedy gusses are on top, it just mean we have to work hard to get them out.