Photos: Our View of the Congress Building 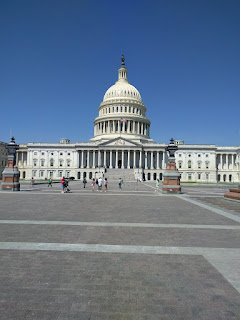 After touring the inside (of what we could see) we got to see all of the U.S. Capitol building from the outside. 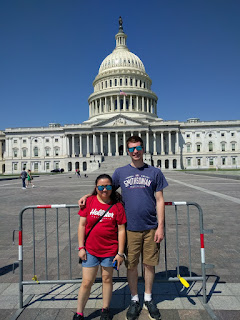 The view from the Supreme Court side. 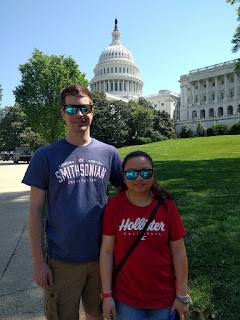 And the view from the more Washington Monument (which is pretty far away from here) side. Much better view on this side though. 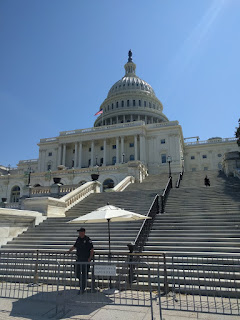 Since a lot of the place is fenced off, it wasn't exactly crawling with tourists all over the place. 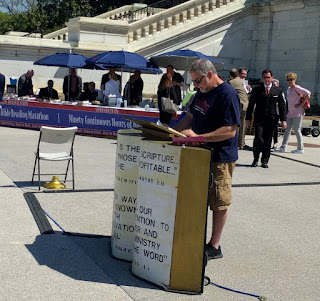 But I did see a religious Christian group set up near the bottom. While some don't take the danger seriously, but these guys really want to control Congress, not be located near the steps. The majority of these guys won't rest until the U.S. government is a right-wing Christian caliphate led by a long rule from Ayatollah Donald Trump.
Posted by Adam at 12:00 PM

The state of our country right now is pretty darn scary. Last year, we wrote to our congressman so we could get a view of the inside of the building. It was really quite interesting.

I found it depressing seeing that building last month. Couldn't even bring myself to catch a glimpse of the White House.

Great pictures. I haven't seen any of this in person so I enjoyed the pictures.

I enjoyed seeing all of your photo's … thanks.

These are great pics. Too bad the admin there right now is...well, I don't want to swear on your blog:(

Nice shots of a classic building.

Kay.
I doubt whether he or his "lovely" Sarah Huckleebee Sanders"
knows that Hawaii is a state of the USA!!
Sarah Palin didn't and her nutters are all followers of the present supreme NUT CASE of the World who unfortunately is the President.
Colin

thanks so much Adam for sharing this, it likely would never have such a great view of this if not for you! You and your wife are a beautiful couple,,

I had no idea these control freaks are set up at the steps of Congress. Booo! Hissss.

One of the things the Husband I would like to do is sit in a session of Congress.

Sadly, you find those kinds of nutty people in many high traffic areas. There's one that sits on my daughter's campus right by the library with his megaphone yelling at everyone who passes by and another why tries to force everyone to take a bible he's passing out.