Photos: Supreme Court of the United States of America 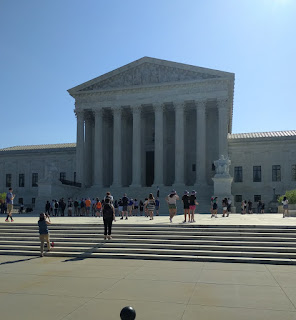 On our last real day in Washington D.C., our first stop in the morning was to see the Supreme Court. I always wanted to see it and it had a decent crowd. 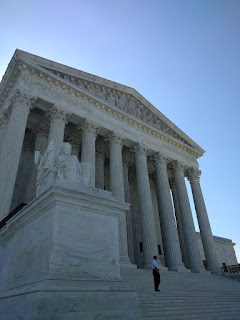 But it's a pretty quiet and calm atmosphere in and outside the place. 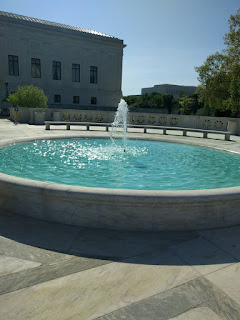 They also had this pretty water spring fountain outside. 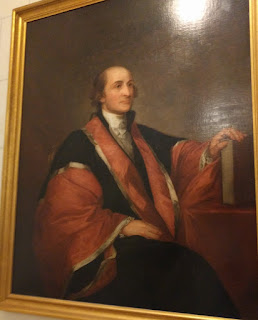 It had a lot of neat things there. Here's John Jay, the first Chief Justice of the Supreme Court. 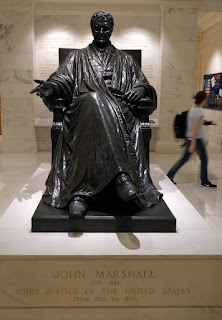 Then we have John Marshall who evolved the court to what it is today. He made sure that federal laws overruled that of the states. 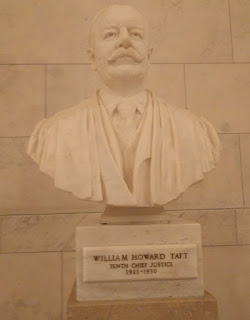 Then we have William Howard Taft, the only Chief Justice who was also (a former) President. He was also way bigger than this might suggest, though he did lose a lot of weight near the end of his life. 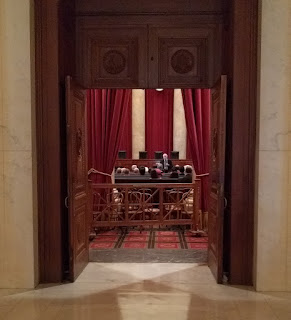 I did get a glance at the actual room where cases are decided. It looked like it was just a tour group in there however.
Posted by Adam at 12:00 PM

I'm not a big fan of guided tours, but Washington D.C. would be my exception. It's on my bucket list.

I remember seeing pictures of Taft and thinking that he was big compared to a lot of the presidents. That was a wonderful trip for you and Daisy! Diana

Your posting is always interesting. First Jewish to the court was Louis Brandeis, and Roger Taney was Catholic appointed.
Coffee is on

Pity that in the US your court can be so politicised and that justices are appointed for LIFE!
Here in Australia they have to resign (retire) at the age of 70.
I believe most countries have similar laws regarding their high court appointees.
Saves having 'ga ga" creatures sleeping on cases before them and still having control of their mental facilities.
Maybe the USA could follow suit???????????????????????

I note that your First Lady is expressing totally different views to that looney she is married to. Look out Melanie you might be off on your own soon but then again that would be better than having to sleep and abide with that sexual predator, foul mouthed monster.
Oh crikey!!!!! Just think "Sassy Sal" of Lubbock or Ms S Cox might be the replacement - ha ha! The mind boogles at that thought!

You certainly made your visit to the dumbest present day capital on planet Earth worthwhile Adam. Your reports and photos were/are very good. Take a bow young fellow.
Cheers
Colin

Still haven’t gone there with our granddaughter or grandsons. We’ll have to save it for our next trip.