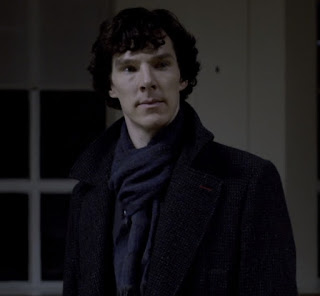 Sherlock Holmes is one of the most classic characters in all fiction, as such, he's had A LOT of actors assume the fictional character. While many liked a more recent one like Robert Downey Jr. in the 2009/2011 films, my favorite by far is the 21st Century version of Sherlock played by Benedict Cumberbatch. The whole TV series is amazing, and part of that is due to Benedict giving such a marvelous portrayal of the character.

Who was your favorite Sherlock Holmes?
Posted by Adam at 11:00 AM

Both Cumberbatch and Downey do a wonderful portrayal of Holmes. I also liked Ian McCellan's performance as an elderly Holmes in a movie several years ago.

Benedict all the way, although I'm also looking forward to the Will Ferrell Sherlock movie:D

There is something to enjoy in every actor's portrayal of Sherlock Holmes. I think Robert Downey Jr did a marvelous job in the two movies he made with Jude Law.

Only British actors can play Sherlock Holmes.
Benedict would do the role to perfection.
Colin

I love Robert Downey I. The role followed by Benedict Cumberbatch. I have a soft spot for Basil Rathbone, Christopher Lee and Peter Cushing and also Christopher Plummer