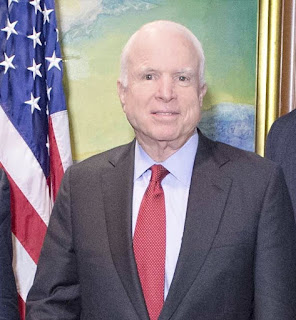 I never agreed much with John McCain, his war-mongering efforts were a major reason I voted against him in 2008, but I do admit he had way more honor than most of his colleagues in the Republican Party. During the 2008 campaign, a racist woman wanted John McCain to agree with her that Obama was "dangerous" and "an Arab". John McCain looked to be very offended by her comment and didn't take the chance to be popular by the far-right by agreeing with her, even slightly. He said Obama was a decent person and a family man. That's very honorable. It was quite humorous to see a lot of the Republican base that wanted him in 2008 to win, turn against him when he was one of the rare few in the GOP that has stood up against Donald Trump.
Posted by Adam at 11:00 AM

I never agreed with his politics, but I admired John McCain as a true American war hero and a man of honour and integrity. Obama is going to speak at his funeral, along with George W. Bush. Trump has been requested not to attend.

A great man who will be missed by all.

I did not agree with his politics, like many, but he was a good and honourable man who is a true hero

He put country before party, something very few in congress have the strength of character to do.
I'm a democrat/independent but I admired him tremendously and consider him a hero.

I feel the same way, Adam. Our political views didn't align but I did admire his honour and integrity.

I agree....I also don't agree with a lot of his views but you cannot argue that he's a good American who really stood up the country's values and honour. I read this on Twitter: "How can we go in 8 years from McCain to this?". So depressing that your president now is doing the opposite of what a good leader should be like:(

He was a TRUE US patriot.
He was honoured here in the Australian parliament, one of a very select few who was permitted to sit with the members on the floor of the House of Representatives ( Congress - USA).
He was a frequent visitor here and was much admired by all.
He will be sadly missed.
During WW2 his Admiral father's submarine flotilla was based in Perth Western Australia.
Took Turnip Top a while to see "HIS SYMPATHY"!!!! What hiprocracy!
His only failure was his "Hanoi Hilton" moment when he selected that idiotic of a woman, Sarah Palin, as his running mate. Something that he rued forever.
So good to see the decent past presidents going to his funeral in respect to this great patriot.
Vale Senator McCain
Colin

"Took Turnip Top a while to see "HIS SYMPATHY"!!!! What hiprocracy!"

The above should read: "TOOK TURNIP TOP A WHILE TO SEND "HIS SYMPATHY" !!! What hypocrisy
!
Even typing that Turnip Top's name gives my fingers the spelling and grammar jitters!
Colin