On my way to my mother's house on my birthday on August 10th, I was driving and I saw a car in the middle of the road. Guy was standing with a puppy for no apparent reason. Then I slowed down and got a good look, and it was my childhood neighbor Tyrone. He said this puppy almost ran out in front of his car. I told him to take him back to my mom's house and see what we will do from there. He was extremely skinny, and when I felt his ribs, I knew that trying to find his "home" was not an option. 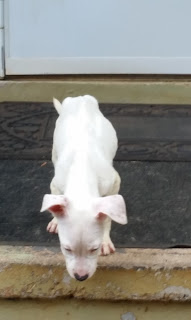 Our first thought was to see if Tyrone's mom could hold on to the puppy until we could find a new dog-parent or take him to a shelter. She turned the poor defenseless puppy away. My mom wasn't too thrilled on the puppy either. She told me "How is this dog, my problem?" Running short on time, I had to think of my options. I knew I had gotten my now departed dog Zelda a dog house when she was a puppy. She only used it once and I didn't think I threw it out. My house wasn't much of an option as I gave someone my kennel and my garage has too many tools he might accidentally hurt himself with. 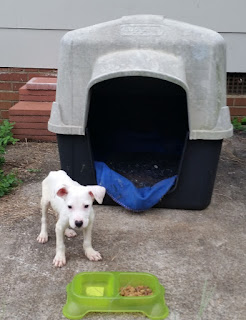 And sure enough, the dog house was still there. I had to rush to clean it out. Luckily there was a blanket and pillow in decent shape. Tyrone had some dog food and the puppy ate it which was good that he could stomach something other than his mother's milk. He also seemed to be thirsty. Luckily it was done before the rain poured and poured down hard. When we came back from my birthday dinner, a co-worker named Danielle talked with her husband and they wanted Mr. Puppy. I asked her if she wanted him that night. She agreed and I drove him 15 miles in the dark rainy night to send him to his new home. 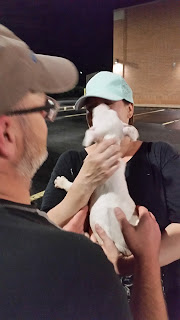 It was love at first sight. I had to put him into a cat carrier my mom had, and he did not like that. I asked if they had thought of a name, and they said "Sarge". Good thing I was right about him being a boy huh? I only looked once. 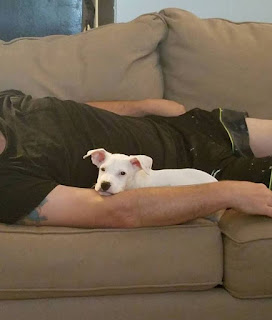 Sure enough he got his healthy weight pretty quickly. Danielle says Sarge is a daddy's boy. He also has some dog siblings, one of which "mothers" him. 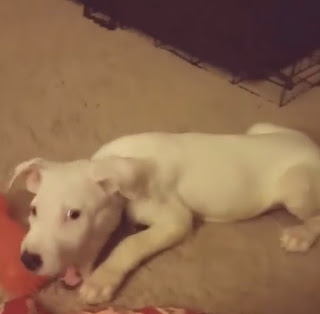 He's getting rather big now. 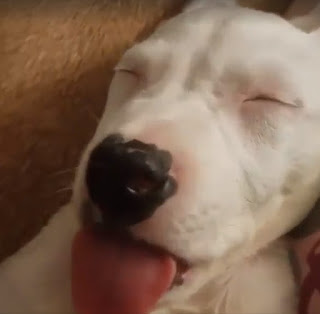 Danielle told me this is his normal sleep face. Such a funny puppy. We are certain he's a pitbull mix of some kind. I'm glad he's found a nice loving home because my mom lives in a pretty bad spot of town. Pit bulls attract the worst owners, that's a sad fact of life. He was very likely to destined to be one of those dogs who grew up to be mean, but he's going to be a big goofball now. It warms my heart we got him this bright future.
Posted by Adam at 12:00 PM

Good for you in coming to the pup's rescue. Now he is loved and treated well thanks to you and your friend.

A happy ending for Sarge -- wonderful!

Adam, I know you are a strong young man...but you have a sweet heart. Thank you for caring....I am afraid I'd be like your mom...no way do I ever want to own a dog..It's not that I don't like them...it's that we get attached and I do not want a broken heart, if they get sick or die. I think that is a pit bull mix. If it had a ring around it's eye it would look like Petey the dog from Little Rascels. Blessings, xoxo, Susie

Awww what a happy ending for the puppy! Good job Adam!

He's adorable! I'm so glad you were able to find him a loving home. He looks happy now.

aww good for you Adam, you did the right thing!

This warms my heart to. So glad you saved him and even better you found him a wonderful home.

Awesome you found him a great home and out of the hands of most likely douchebags.

Little pup was lucky you and your friend were there to see he got a good home. I hope he has a happy life now!

Adam, that was really super nice how you made sure the poor little one was ok. And yay for your co-worker Danielle:)

Aww, what a sweet story. Thank you for being so kind!

Yes, don't bring that dog back home if he's that skinny. I hope it all turns out OK.