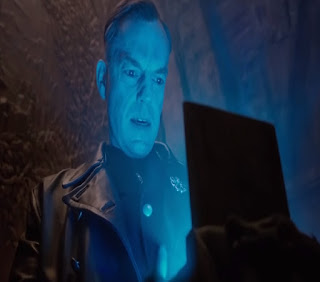 The Marvel Cinematic Universe's take on Captain America's greatest nemesis was done pretty well. The MCU incarnation is like most of Marvel's Red Skull versions. His name is Johann Schmidt and he's a high ranking officer in Germany's science field of the Nazi army called HYDRA. He finds the Cosmic Cube in Norway and takes it for himself. 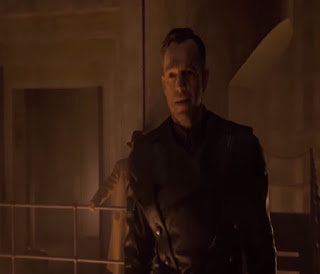 Having the Cosmic Cube is impressive enough, but he was the original subject of the super soldier serum which eventually fell into American hands. 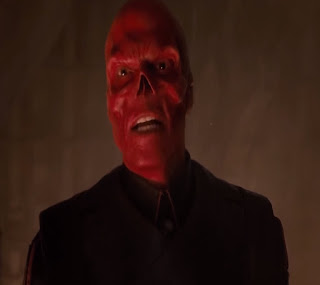 Though the serum on Red Skull had some negative effects before it was perfected to be used on Steve Rogers. Despite that, he was just as strong as Captain America, even without the metal frisbee. 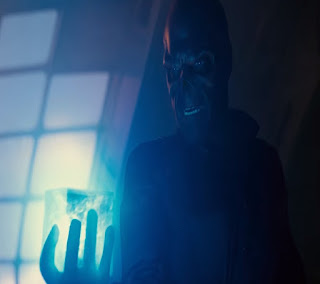 Though after a hard-fought battle, Red Skull tries to the use the pure power of the Cosmic Cube (which was really the Space Stone Infinity Gem) to win and he just vanishes. I thought he was dead to be honest. 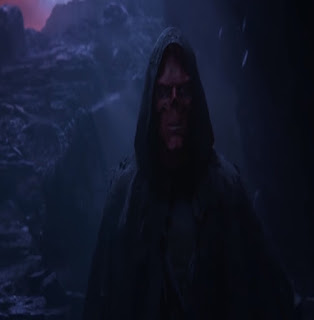 But it turns out that was a sort-of there. He becomes a spirit guide for those who wanted to seek the Soul Stone Infinity Gem on Vormir. Without his help, Thanos wouldn't have known what to do to complete his collection. I guess now that Thanos has all the Infinity Stones, Red Skull is fired.
Posted by Adam at 11:00 PM

I don't know anything about this...sounds like you enjoy it.
Hope Daisy is doing good....

sound interesting.
Coffee is on

No, I suspect Red Skull will reappear as nemesis in the second part of Infinity War when Steve Rogers plans to sacrifice himself to the Soul Stone to reverse everyone's death from Thanos' "snap." How's that for a prediction?

If it goes the way of the comics, Nebula will get a hold of the Infinity Gauntlet and reverse all the change. Though in the comics, it was a bit of a trick on her.

Red Skull will be back.