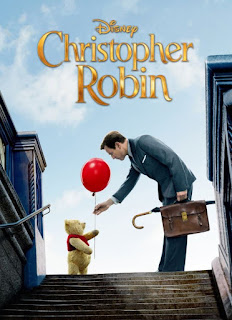 To be honest, Winnie the Pooh was something I never saw much as a child. I knew the characters and the whole gist of the series but I never was a real "fan" of it, for whatever reason. My wife Daisy was a fan of the Pooh bear, and I thought I would take her to see the movie Christopher Robin on her birthday. I had some strong interest in the movie, as it seemed to be a very similar twist on the story like Hook (1991) with Robin Williams was with the Peter Pan stories. 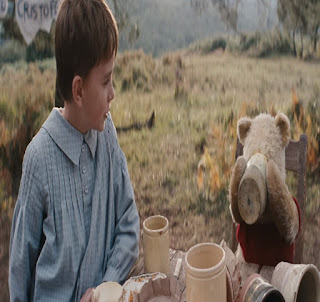 The story shows Christopher Robin as he is a kid. Winnie the Pooh and the rest of the friends throw him a going-away party as he's about to start boarding school and will no longer be able to see the Hundred-Acre Wood. Then we see his father pass, Robin is drafted in World War II, he gets married, and has a daughter of his own. Robin eventually works for a luggage company and when a post-war era makes business bad, he is under huge stress to save the company with no easy answer. 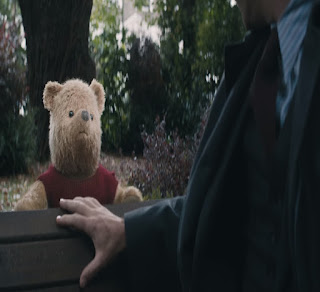 Winnie the Pooh wakes up one day and realizes all of his friends are gone. He decides to find Christopher Robin and takes the magic door out of his realm. He ends up in London and sure enough Christopher Robin is right nearby as he leaves the tree. 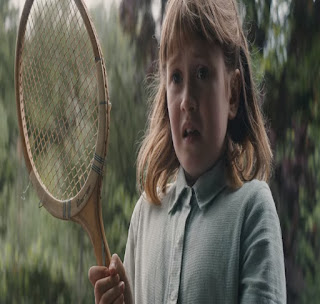 The problem is that Christopher needs to be working, as he had to leave his wife Evelyn and his daughter Madeline to vacation alone. Pooh proves to be very troublesome for Robin, and he agrees to find Pooh's friends to save them. But in truth, it will be Pooh and friends who will save the Robins, not the other way around. 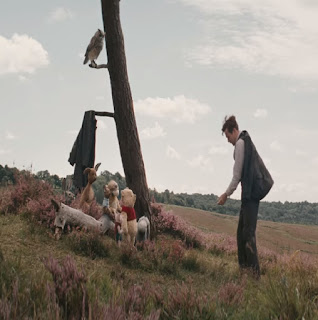 Overall I was really pleased by the new Christopher Robin movie. My wife Daisy seemed to really like it as well. It's not the perfect movie by any means, but it's sweet, cute, and shows the importance of family and friendship. I think the biggest flaw in the story is Christopher Robin seems to have never forgotten Winnie the Pooh, he just never wanted to go back, which is a little inhuman and out of character. It would have made more sense if he had forgotten that part of his childhood or eventually believed it was all non-sense and imagination.

My son went and saw this but I haven't yet. I grew up with Winnie the Pooh and am looking forward to renting the movie. Plus I always liked Ewan McGregor.

Ok, now I want to see the movie. It's not at all what I thought it would be about, the real Christopher Robin. I feel sorry for the real dude and the chasm between him and his dad.

I read all the "Winnie the Pooh" books to my sister when we were kids. I never cared for the frenetic Disney version. I want to see this new movie too but have not gotten around to it yet.

I am looking forward to seeing it. My hubby took the grandgirls and they really liked it. xo Diana

All I can remember in those many years ago - like 73 when I was two years old, my mother/father and/or grandparents putting me to bed with the words:
"Christopher Robin is saying his prayers" !!!

I was never into Winnie the Pooh, but I saw the trailer for this movie and it felt like a feel good movie.
Have a great weekend Adam.

I thought I'd read somewhere that the real Christopher Robin wanted no part of Winnie the Pooh and wouldn't accept any of the royalties. I wonder if that's true.