Fact of the Day: Doctor Dictator 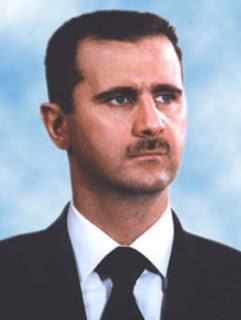 Unlike many world leaders, Syria's president Bashar al-Assad is a medical doctor. His older brother was expected to take over their father's role, but when he died in 1994 in a car accident, Bashar was called back to Syria after training and performing duties as an eye doctor in London.
Posted by Adam at 12:00 AM

Did he forget the do no harm part?

In my observation over the years, doctors are often some of the worst, stupidest, immoral or most vicious criminals in politics. I think it's because doctors have that "god complex" -- it's deadly when transferred to politics.

I had no idea!

Ron Paul and Rand Paul are doctors, you seem to be on to something. While both Pauls would not admit it, they think they are. And Ron's sheep really think he is.

Who knew.
Thanks for the info, Adam.

I would never trust my eyes to that evil looking man.

Josef Mengele of Auschwitz infamy was a talented doctor also.
Some doctors, like many other professional people do, have when in power TWISTED brains.

Turnip Top, Sarah Palin and Sarah Huckabee-Sanders are not professionals but they have twisted brains!!!!
Seems as I have suspected as a devoted tennis follower that Serena
Williams of strange tennis attire has really now joined the ranks of the above 3. What a disgusting performance once again in a US Open final......she did it against Sam Stosur and Kim Clysters when both of them defeated her.

I wonder if a Turnip Top and Serena ROMP in the Lincoln Bedroom in the White House result in a seismic event occurrence on 1600 Penn Ave.
The mind boogles with DJ "Sassy Sweet" as the umpire - ha ha!
Colin