Fact of the Day: Helene Mayer 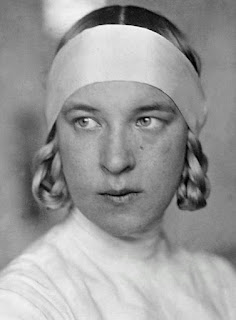 Helene Mayer was a German woman who had a Jewish father and a Lutheran mother. She was an Olympic fencer who won the gold medal in the 1928 Summer Games in Amsterdam, Netherlands. Due to the anti-semitic laws in Germany during the 1930's, she left Germany and settled in the United States. She oddly accepted Germany's request to compete on behalf of her birth-nation in the 1936 Berlin games as long as she appeared to be "German" and her half-Jewish ancestry was kept a "secret". She won silver that year, and claimed that she did so to protect family that remained in Germany. After World War II, she moved to West Germany and kept pretty quiet on the matter until her death in 1953.
Posted by Adam at 12:00 AM

I can imagine how torn she was by what she had to do.

Sad that she had to hide it.

Interesting. That is a terrible time in history and I'm very much afraid we're heading into dark times again.

What a tough spot to be in.

Ironic that it's the same Olympics where Jesse Owens won all his medals, much to Nazis' chagrin.

I think she was brave to go back considering the danger to help her family. Those times are something we really can not understand unless we lived it.