Fact of the Day: Jumbo the Elephant 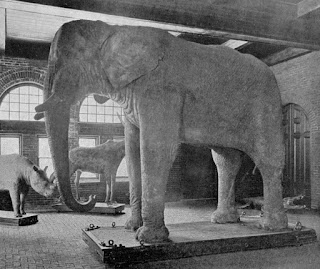 Jumbo the elephant was a popular elephant who originally went all over Europe, and also gave rise to the modern meaning to the English word "jumbo". Eventually Jumbo was owned by P.T. Barnum and his circus. However, a tragic accident mortally wounded Jumbo after a train hit him. P.T. Barnum made up a story that Jumbo died trying to lead a younger elephant to safety.
Posted by Adam at 12:00 AM

P.T. Barnum always put a spin on everything -- FAKE NEWS!

OMG, that's so sad about what happened, and a shame about that lie! Hugs and Happy Wednesday. Be safe this weekend! RO

I was always sad about Jumbo and he died about 2 hrs away from me.

How very sad. I did not know that. Poor Jumbo.

Oh that is sad.

That is quite sad.

Well the "made up story" is nicer than what really happened to a very popular circus entertainer - Jumbo, the Elephant.

I guess the headlines of "POPULAR CIRCUS ELEPHANT KILLED BY TRAIN",
might have suited some??????????????
Really I'll settle for the "made up story" on this one.
Colin