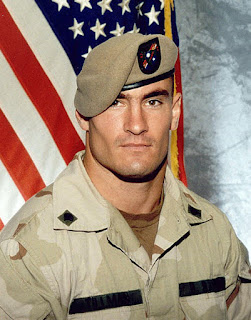 Pat Tillman was a football player for the Arizona Cardinals who turned down a huge deal in the NFL to serve in the U.S. Army. He died after hit by friendly fire in 2004 during the War in Afghanistan, a event that some believe wasn't a mere accident. In his persona life Pat Tillman was an atheist and liberal, and by 2004 he was highly critical of George W. Bush and the wars. Despite this, right wingers, including Donald Trump used his name and memory to attack Colin Kaepernick during the NFL Anthem controversy, which deeply offended his widow, family members, and friends.
Posted by Adam at 12:00 AM

Email ThisBlogThis!Share to TwitterShare to FacebookShare to Pinterest
Labels: fact of the day, NFL, politics

So much for the "no atheists in foxholes" nonsense.

The Trumplings will exploit any tragedy shamelessly to score points and promote hatred and division, regardless of what family members think. It's happening all over again with the Mollie Tibbetts case.

Trump should wash his mouth out with soap for sullying Tillman's name.

I sure am getting sick hearing about Kaepernick...all the talk about him is just what he wants. I am a firm believer in kneeling to God and standing, hand over heart, for our National Anthem.

Trump is such an idiot

There is a principle involved.
I believe he knelt not to insult the US flag but to show the world that Trump's insults to the world and his intolerable behavior to mankind.
Seems Trump has got "moles" in 1600 Penn Avenue, we certainly know that northern Texas has limey green gophers!
Colin

Also is your wrath ( ill-directed and stupid as the norm) directed at Colin (lovely Christian name, eh?) Kaepernick
really about kneeling or the colour of his skin???
I hope you have now rid all the "Sassy" Sue clan of their nike shoes, soxs, T-shirts, shorts and caps??????????????

Cheers to the Tea Party Misfits from Cheerful Colin

The protest is about police brutality, and a great many football players are participating, not only Kaepernick. The kneeling protest is an almost textbook case of a legitimate form of freedom of expression. It's not violent. No one is being hurt, no windows smashed, no traffic blocked. It's being done in a situation that makes it highly visible, but that's necessary for a protest to be effective. Yet even this, to the right-wingers, is out of bounds.

Evidently the fundie/wingnut element doesn't want black people to have any options at all for expressing discontent. I expect no better from them, though.

Shameful. And I admire Kaepernick.