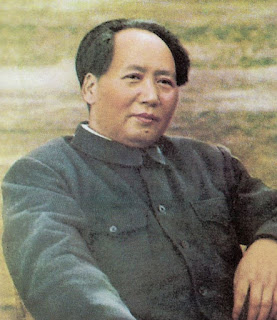 "Politics is war without bloodshed, while war is politics with bloodshed."

Despite being a despot and someone who spoke very limited English (some quotes in foreign languages don't sound that great), Chairman Mao had some pretty memorable quotes. This quote is very true in a democratic society, however when it came to tyrants with absolute power such as Mao, Stalin, Muammar Gaddafi, and Francisco Franco; the bloodshed didn't stop at the end of the war. So I do enjoy the irony here as well.
Posted by Adam at 12:00 PM

These men are powerful and scary.

Mao certainly had no qualms about spilling his own people's blood.

People with no conscience.

I think Americans forget - Trump is endeavoring to join this "elite club"!
Colin

Many of us know that's what he wants.

Yep - and then this on the counting stakes:
"US PRESIDENT Donald Trump has rejected the widely accepted conclusion that nearly 3,000 died in Puerto Rico from Hurricane Maria, arguing without evidence that the number was wrong and calling it a plot by Democrats to make him look bad."

Good God not even Stalin, Mao, Adolph or any other ex-dictator would have come up with the likes of this!