My (Not So) Favorite Quotes: Tom DeLay Constitution 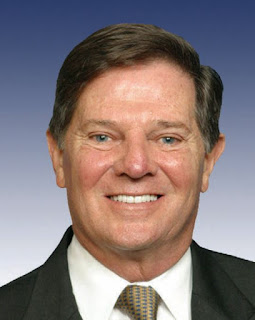 “When we stopped realizing that God created this nation, that he wrote the Constitution, that it’s based on biblical principles.”

While many wouldn't remember him now, but Tom DeLay was the House Majority Leader during a good majority of the George W. Bush days. That meant he was actually pretty close to becoming Speaker of the House, but never did. But this quote is rather scary as it shows how radical and false many in the Republican Party are when it comes to religion. Unless Tom DeLay thinks James Madison is God (wouldn't that be a interesting faith?), he is absolutely, without a doubt, WRONG. Colonial America was forced to accept the Church of England (for the most part) as the one true "religion", and they also saw how religious wars bathed Europe in violence. It's not a surprise they wanted a secular government. If Tom DeLay really believes this, then why isn't God, Jesus, Bible, or anything relating to Christianity alone mentioned in the Constitution even once?
Posted by Adam at 5:57 PM

This "bloke" - whom I have never heard of can crap on as much as he likes.
The "likes" of this creature should be ignored,
Anyhow I doubt if the world will ever have him in 1600 Penn. Avenue,
one bigot and clown should have cured Americans (Yanks) of fools.

I wonder how much longer Secretary of Defence, Mattes, will last?????
The Attorney General also seems to be on borrowed time.

Maybe this Tom DeLay might be such a good arse-licker that he could get one of those coveted positions???????????
Cheers
Colin