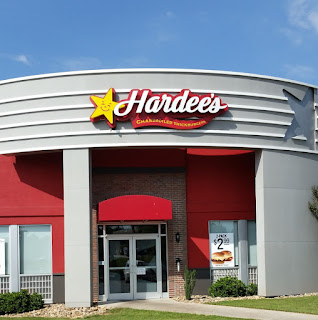 To my friends on the west coast, you may know this restaurant better as Carl's Jr. They used to be separate, but they're one in the same now. I heard they had some Fruit Loop mini-donuts and I wanted to give them a try. They were out which really ticks me off. 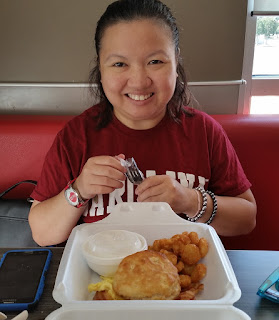 We still got breakfast there because it would have been awkward to leave the line like that after we got to the counter. Daisy was looking forward to the breakfast platter. I will say, this Hardee's was not run well. Most of the tables were not clean, the kitchen had food crumbs all over the floor, and while I imagine they could of been having a bad day, I read comments later that confirmed what I was seeing. Surely the owner must know of the faults by now, I don't know about him/her, but if this was my restaurant, I would have replaced every crew member. Because we won't be back sadly.
Posted by Adam at 12:00 PM

I haven't been to a Carl's JR in a long time. I hardly ever eat out these days.

There's a Hardee's that's about 6 minutes from my house,and almost always if I visit, it's from the drive through. Like you, I'm turned off by uncleanliness in a restaurant, and it makes me shudder to think how the bathroom may have looked.(lol) So I think I'll pass on those mini-donuts. Sorry you had such a yucky experience. Hugs...RO

Daisy looks happy with her breakfast.

We used to have Hardee's around where I used to live but they all closed up.

At Denny's restaurant they served me a glass of ice tea which was filthy. It was too late. I didn't notice until I had a sip. I'm not going back.

Our Denny's gave me root beer instead of Dr. Pepper. The waiter looked dumbfounded when I told him about it. Though I never had an issue with things being unclean at our Denny's, but I don't like Denny's very much.

Here's hoping the owner knows what to do for his sake.

I tried the foot loop doughnuts! They really do taste like fruitloops. They are 1.99 a box. Cute little things but when Nick ordered through the drive thru, he said “a box” and they thought he said “4 boxes”. I was like no way those things are 8.00! He wouldnt complain about the price and drove off. I saw in the bag there was 4 boxes and was so made that he would not speak up!!!! We ate them all in a day.
Lisa

That's too bad. S/he will continue to lose customers.

We no longer have Hardee's here. They all closed. That being said, when Dunkin' Donuts had their Reese's Donuts they were always sold out every day before we got there. I had no problem leaving the line and not buying anything. If they can't make enough and run out by 7:30am, they don't deserve any of my money for wasting my time.