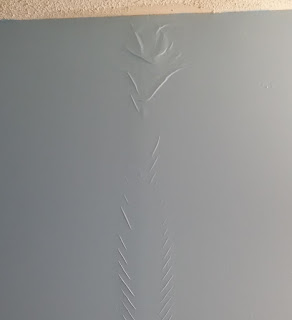 Daisy calls me one day at work and says "there's something wrong with the bathroom wall" which isn't something good. I wasn't hoping Daisy would have been exaggerating and it would have been something stupid like a bug stain or something. Nope, it was a good bit of water made quite a mess with the paint and the drywall. 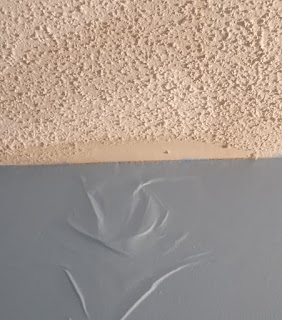 Came from the ceiling (obviously) and took some of the popcorn ceiling with it. 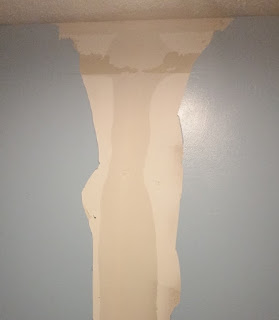 Had to take a blade and cut the water out of the drywall before it made things worse. 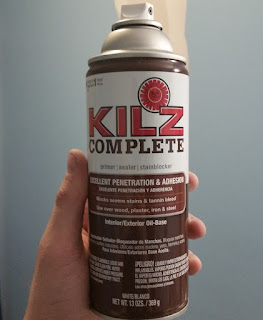 Then spackled and primed the wall for good measure before I repainted it. Used the same primer to seal the ceiling stain. Oil-based primers are the best at blocking water stains, so Kilz Complete is one of the strongest versions of Kilz around. Luckily I don't mind messing with oil-based anything as long as I can spray it. It did the trick.
Posted by Adam at 12:00 PM

So is your roof leaking or what? Don't you have to fix that or it will just happen again?

You always have great how-to tips on your posts, Adam.

As Debra says, my first thought. Better get it checked Adam.

Yes roof leaks will cause accidents again like this if not fixed. I did learn through research that they don't exactly affect the same spot which makes it tricky to figure out where the leak originates.

Good thing you're an expert on this stuff!

I hope you find where the leak is coming from. Water damage is no joke so you'll want to nip that in the bud asap.