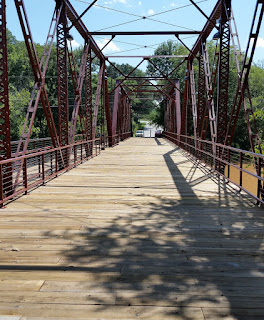 Earlier this year, they finished work on the old Glendale Shoals bridge. Almost completely re-working the bridge to be like new. Apparently people used to drive on the old bridge, and eventually they closed it up to vehicles. They did the same with the new bridge. The old walkway was concrete but the new one is made of wooden boards. There are still poles on both sides to keep stupid drivers from doing something idiotic. 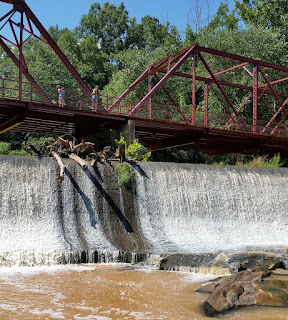 They did a nice job, and it really improves the view of the waterfalls and whatnot. The old paint on the original bridge was starting to show its age, big time. The water comes from Lawson's Fork Creek which flows into the Pacolet River. 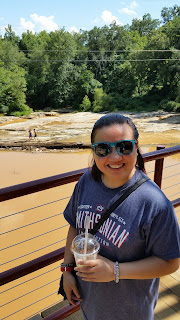 It's quite a view from top of the bridge as well, just like the old one, of course. 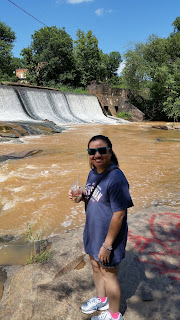 There had been a lot of rain in the area when we took a look that day. The whole river was "flooded" as I call it. Most of that brown water you see behind Daisy covers rocks that you can usually walk on. 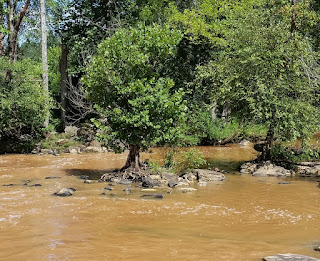 Same with this area with the tree in the middle of the creek. I just revisited the other day and the water wasn't flowing very much.
Posted by Adam at 5:00 PM

Cool bridge and I'd like to take a walk across it.

Nice walking bridge. It seems to be feast or famine this year with rainfall doesn't it?

Too bad about all the rain or maybe it's a good thing except it covered the rocks.

Wow that bridge is amazing!! I love architecture like that.

Cute little bridge. It looks like a nice area for the locals to enjoy.

There used to be two bridges like that in our county, which the powers that be took down in 1980s. I still think of them when I go by where they once were.

What a beautiful spot... even muddy.

Cool spot. You can get some really nice photos out of that.