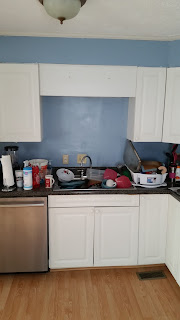 The kitchen was the last room in my house that I painted. I actually liked the color chosen from the previous owners (the only time in this house) but I painted the living room beige, so a blue kitchen didn't exactly go with it. Plus the paint was a cheap contractor grade and I could easily tell it wasn't holding up, and that's in a kitchen where we don't do much fancy cooking. 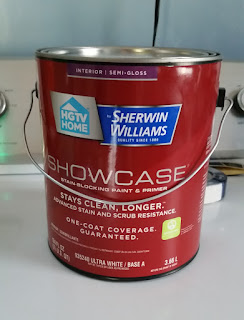 Like my spare bedroom and office, I used Sherwin Williams Showcase which is an interior latex/water-based paint. I had been happy with it in those rooms, so I didn't mind getting another can of this for the kitchen. Unlike those two rooms, I chose a semi-gloss finish as it's more durable for a kitchen. Kitchens and bathrooms I highly recommend you stick with semi-gloss, you can settle for satin but never go with flat or eggshell. We chose the color French White (1093) by Benjamin Moore as it was a lighter shade of the living room color Oakwood Manor (1095) by Benjamin Moore 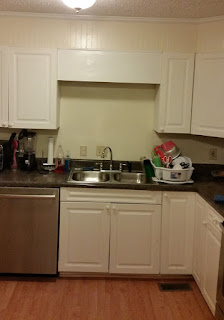 But this is shortly after I got done. This was at night (the first picture was taken during the daytime with much better light) so it looks darker than it does during the daylight hours. I also used some high gloss white paint to cover the crown-moulding. While it's hard to see looking at the pictures, the trim was painted with a cheap grade in one of those gray-ish whites. I used a good high-gloss paint in a pretty white shade, and it looks so much better in person.
Posted by Adam at 11:27 AM

I love the change. A much more consistent, clean look, too. You do good work!

You did a great job. It looks so nice!

Great job, the kitchen has to look nice.

Paint is a great way to freshen a place up!

That was a pretty blue. I also like your paint of choice. Creamy and appealing to the eye. :-)

Wish you lived near me, need some painting as well. You did a very nice job.

Nicely done, Adam. Looks great. And I agree with you about the finish. Kitchens and bathrooms have to be washable!

Good job! I like this color much better for the kitchen over the blue.