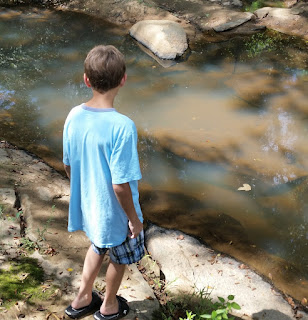 As I've said before, I volunteer with the Big Brothers Big Sisters program. I've been a Big Brother for almost a year now. I took my Little Brother Mr. B to the park near my house as he had never been before and it was good-ish weather that day. He wanted to get near the water and look for salamanders. 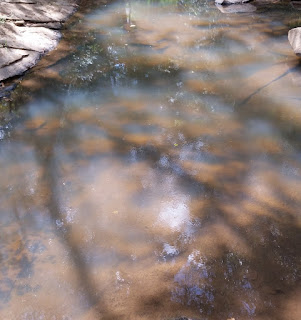 He didn't see any, but he found a few tadpoles. He thinks he saw a fish, but I didn't spot it. The water is fairly muddy and doesn't have much "life" in it. 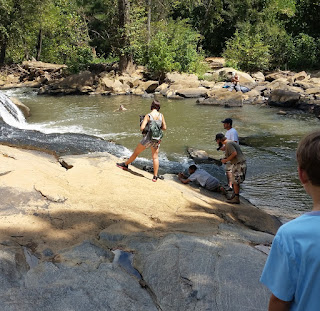 Near the waterfall section, I saw this group just hanging about. It was obvious they were doing something interesting. 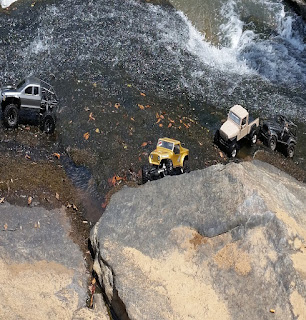 They were having a race with RC cars. That's pretty neat! Though, I'd be too worried about accidentally driving one (or it falling) into the water and being ruined.
Posted by Adam at 3:31 PM

With all those tadpoles, I'm surprised you didn't find any frogs to catch at least.

Now that is sure a great thing to do. Bet that young man enjoyed that.

Adam, I didn't know you were a big brother. That is such a wonderful thing to do. The gift of time and friendship. I am sure it will leave a lasting impression in both of your journeys.

I am impressed that you have kept this relationship going Adam, true sense of commitment.

Is it my imagination or are you watching me?

A wonderful thing that you do. : )

That is neat:) And yay for volunteering.

Good for you, Adam. I bet you make a wonderful Big Bro introducing him to different things.

You are so wonderful to be a Big Brother, Adam. I really admire you for this. You can make such a big difference.

A nice way to spend time. Nice of you to volunteer, Adam!

Adam, I think this is a wonderful thing you do.