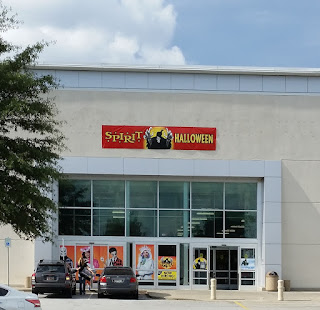 I kept making jokes to Daisy that we should go to Toys R Us after the company shut all of its American doors for good. I was a bit shocked to see people around the building until I realized Spirit Halloween took over the spot for the Halloween season. 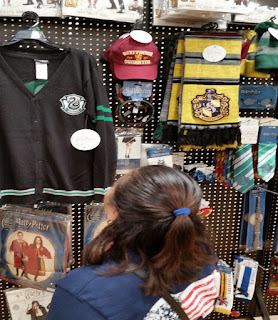 I already got my costume last year after Halloween was over, but Daisy was looking at the Harry Potter stuff so she could update her costume. However, she's a Slytherin, and since the books favor Gryffindor, it was slim pickings.
Posted by Adam at 12:00 PM

God way to use that space.

It's rather sad, but there was only one trick or treater in our neighborhood last year.

Good to know the old store was being used.
Halloween will soon be here.

It is that time of year!

All of a sudden I want to wear a costume.

Two years ago, I had a ball trying on wigs ina Halloween store.

These stores are always fun. We have a Halloween store set up in the local mall.

They are in our Toys R Us too this year. I bought some of their Nightmare Before Christmas stuff for my kitchen. It's always fun to browse those kinds of stores for new Halloween goodies.

I love Halloween stores! One was in our old Target last year.