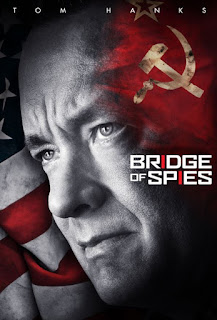 Just a short number of years ago, I remember when Bridge of Spies was new. It starred Tom Hanks, it was directed by Steven Spielberg, and it made a decent splash at the Oscars as well. It was also set during the Cold War (made obvious by the poster) which I am quite an expert in the history of. Bridge of Spies takes a real-event story that is a quite a bit lesser known than other events during the Cold War. 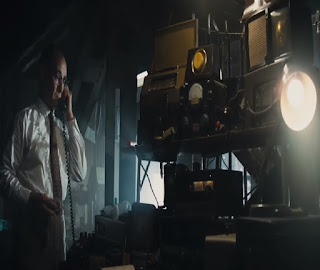 You first see a man named Rudolf Abel who seems like a typical old man with very little excitement in his soul nor his personal life. That's until the FBI breaks into his house and claims he is a Russian spy for which Abel is unconcerned of. He shows more concern for the the artist paints in his room drying out that being deemed an enemy of the state. 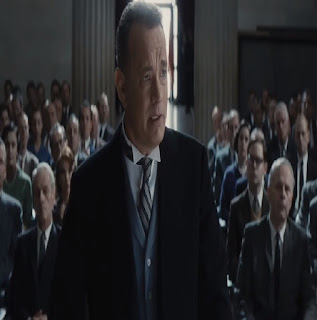 Well it turns out that Rudolf Abel really is a Russian spy for the Soviet. Being born in Great Britain to communist exiles helped fool people for years. The U.S. government wants the world to see Rudolf Abel get a "fair trial" so they don't just appoint some mediocre public defender. They ask the talented New York lawyer James B. Donovan to defend him in court. Donovan worked during the Nuremberg trials so he has history with high-profile cases of political importance. But like a good lawyer, he tries to defend his client to the best of his ability, even if he is deemed a traitor by his fellow Americans. 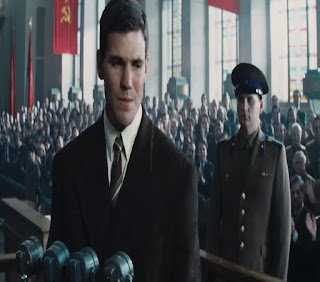 Things get tricky for the U.S. government when the Air Force pilot Frances Gary Powers is shot down over the Soviet Union after taking pictures with his plane at 70,000 feet in the air. Powers isn't badly injured and the Soviets capture him. The U.S. government really wants Powers back before he cracks, and the Soviet wants the same from Rudolf Abel. Can a deal be made in such tense times between the world's superpowers? 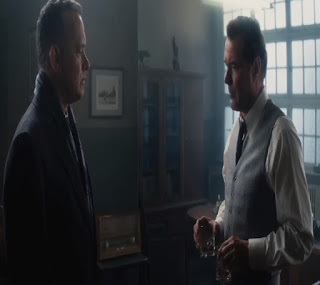 Overall I liked Bridge of Spies about as I had expected. Like any Hollywood film, it does take some liberties with the actual events. I did hear that the real Frederic Pryor said that most of what happened to him was exaggerated. If Powers and Abel were alive in 2015, they'd probably might of said the same thing. Another thing that diluted the movie for me is knowing the outcome, despite all the scare tactics you seen in the film by the Communist officials, even if you didn't know history, you could guess how it all ends out at the finale. Mark Rylance won an Oscar for Best Supporter Actor for portraying Abel but I though Tom Hardy should have won that Academy Award for his role as John Fitzgerald in The Revenant.

We enjoyed this movie.

You have me interested in seeing the movie, Adam. Thanks. We're running out of films to put on our Netflix queue.

We liked this movie when we watched it. I'm a fan of Tom Hanks.

There is an excellent documentary on the above events.
I think it was BBC or BBC/European - it really portrayed all this
out in fine detail - no Hollywood hype or perversion of the truth!
Colin

Tom Hanks provides any movie with depth. I enjoyed this movie.

Tom Hardy was in the Revenant? Will have to look that one up.

I enjoy your blog, will have to stop by.

This is one movie I'd like to see. I saw a hilarious clip based on it on tv. Tom Hanks and perhaps James Corden acted out several short scripts submitted by elementary children who were only given the title "Bridge of Spies." It was fascinating to see how their little minds worked when they knew nothing about what the real "Bridge of Spies" was. Tonight is Friday night, and I'm making myself go down and find a movie on our cable. Whether you realize it or not, you are always prodding me to make the time to watch movies. They tend to get away from me.